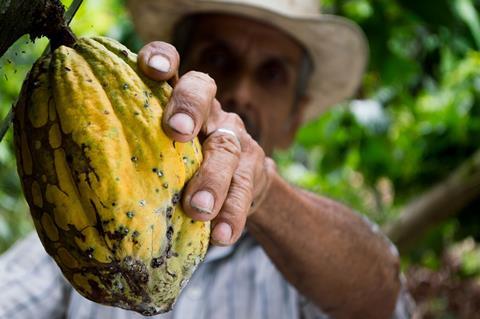 Cheap food may sound desirable, but at what cost? People must not be exploited

Slavery shouldn’t have been accepted in 1821 and is definitely unacceptable in 2021. Yet UK food outlets still contain food produced by slaves.

How a food company addresses modern slavery is a good litmus test of its ethical credentials. There has been welcome action from some in recent years. However, a slave-free food sector will remain a distant dream unless those in positions of influence step up.

Nowhere are debates about livelihoods more front and centre than in chocolate. With Easter approaching, will chocolate brands deliver verifiable ethical promises on hollow eggs, or make hollow promises on so-called ‘ethical’ eggs?

Tony’s Chocolonely – whose mission is a slave-free chocolate sector – was criticised for being associated with a large cocoa processor accused of modern slavery in its supply chains.

The beans used in its bars are processed on contract with Barry Callebaut, which has just been named as a defendant in a US court case brought against the cocoa industry by International Rights Advocates on behalf of eight former child workers on plantations in Ivory Coast.

However, Tony’s says it uses only fully traceable beans and that “we have never found a case of modern slavery in our supply chain. But we do find instances of illegal child labour occurring on the cocoa farms where we source our beans. We have always been 100% transparent about this. And fully clear that it is not acceptable.”

It argues that actively seeking out human rights abuses and being transparent about them is crucial to addressing them, as a company and a sector. It wants to influence other chocolate companies to do the same. Some won’t like its pragmatic approach, but aiming high and being fully transparent about failings are much better than aiming low or being selectively transparent. I welcome brands that address slavery head on.

A cheap food culture, plus complex, opaque commodity supply chains, create fertile ground for modern slavery. Cheap food may sound desirable, but at what cost? People must not be exploited. Companies should treat and reward workers fairly, increase transparency and shorten supply chains. Challenging, but it can be done.

A company can’t move the dial to a slave-free sector alone. A purpose-led brand needs a collective mission, co-operating with farmers, suppliers and governments. As our chair, philosopher Nigel Dower, has said: “It’s important to balance sticking to one’s principles and being effective in the world by working with those who don’t fully share our principles.”

The UK government recently introduced a registry for companies to publicly share modern slavery statements – a positive, if baby, step. However, it will only be impactful if companies are held to account on what they say and do. Shouldn’t food – indeed all – companies be liable for supply chain human rights breaches?

Governments must do at least three things. Firstly, enact stronger modern slavery legislation. Secondly, ensure a properly functioning safety net, to reduce the likelihood people are exploited as slaves in their own country. And thirdly, in the UK, face up to the legacy of injustices relating to slavery in our colonial past.

We won’t address slavery by brushing it under the carpet. If you find modern slavery in your supply chains, tell people and act. The more we all talk about it, the more likely companies and governments are to take action – so we can all eat slave-free food.