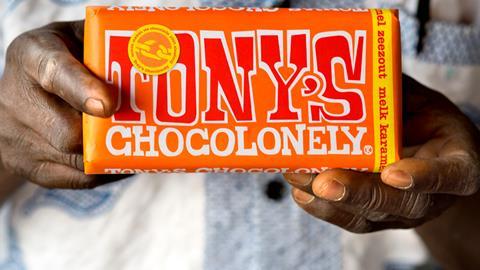 A rush to ‘cancel’ Tony’s Chocolonely would be a mistake

Is Tony’s Chocolonely the latest victim of ‘cancel culture’?

The much-loved ethical chocolate brand – whose raison d’être is the eradication of slavery from the chocolate supply chain – became the subject of immense scrutiny this weekend when it was revealed it had been dropped from Slave Free Chocolate’s list of ethical chocolate companies.

It was dropped from the list because beans used in its bars are processed on contract by Swiss chocolatier Barry Callebaut, which has just been named as a defendant in a US court case brought against the cocoa industry by International Rights Advocates on behalf of eight former child workers on plantations in Ivory Coast.

On the surface, this absolutely could not have come at a worse time for Tony’s. Just last month, it made the headlines by accusing its ‘big chocolate’ rivals of pressuring Sainsbury’s to drop its ‘Sweet Solution’ chocs – a limited edition range of tongue-in-cheek Ferrero, Twix and Kit Kat imitations designed to  ”raise awareness of the issues in the chocolate industry”.

As always, those who take the moral high ground have the furthest to fall. Tony’s has made few friends among big rival big chocolatiers, not just with its vocal criticism of their supply chain standards, but also its growing sales and steadily increasing popularity. And former fans of the brand might now be inclined to write it off as yet another disappointing example of corporate hypocrisy – of a business talking the talk but not walking the walk.

But is that fair? That Tony’s works with Barry Callebaut is no secret. According to Tony’s head of impact Paul Schoenmakers, Tony’s contracts out a separate arm of Barry Callebaut’s factory that has been specifically set up to accommodate full supply chain traceability since 2015.

Barry Callebaut processes Tony’s cocoa beans (which it sources itself ) into cocoa mass and cocoa butter and turn that into the liquid chocolate couverture. That is sent to its moulding partners who produce its finished bars.

Schoenmakers says the brand completely stands by its relationship with Barry Callebaut and is “triggering them to change”.

Indeed, Barry Callebaut is already working to eradicate child labor from its supply chain by 2025 and says it “strongly” condemns ”forced labor, slavery and all practices that exploit both adults and children or expose them to harmful or hazardous conditions.”

Yet for Tony’s, working with a big supplier like Barry Callebaut is fundamental to proving its model works, says Schoenmakers. If it did 100% of its production in house, big players could write it off as a niche business whose processes and standards aren’t applicable to mainstream fmcg production.

Schoenmakers argues that, despite being unhappy to be taken off Slave Free Chocolate’s list, “if you look at it, it is a list of small, niche chocolatiers who are doing great work, but we are not in competition with them – we are competing with the mainstream chocolate industry”.

He certainly has a point here. Tony’s is one of the fastest-growing chocolate brands in the UK, its sales having surged 252.9% to £8.4m in 2020 alone [Nielsen 52 w/e 5 September 2020]. And it’s a genuinely innovative brand when it comes to bringing interesting new products to market.

It is also a B Corp, and has its ethical credentials and activities audited and assured yearly by PwC. Its latest annual report shows it paid an additional premium to 8,457 farmers in its supply chain and remediated in 221 illegal child labour cases – up from 56 in the prior year. That’s not a small deal.

This week Tony’s has been caught between a rock and a hard place. It’s doing the best it can on a critical issue within an imperfect system. Yet in the eyes of the public – especially in the era of ‘cancellations’ – it may now end up looking guilty by association.

Which would be a tremendous shame.