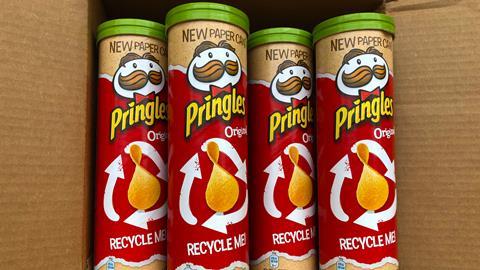 Can Kellogg’s ever make the Pringles can recyclable?

Kellogg’s is trialling two new recycled paper-based Pringles cans. But is it enough?

With its cardboard outer, polymer and aluminium (PolyAl) inner lining, steel base, foil tear-off lid and plastic cap, it is little wonder the Pringles can has been dubbed “number one recycling villain” by the Recycling Association.

The mix of materials used make sorting it “virtually impossible”, says the association’s chief executive Simon Ellin, and leads to contamination of the various recycling streams. Recycling mills don’t want contaminated material, due to higher processing costs and difficulty in finding an end market. Landfill is often the easiest option.

As Greenpeace UK lead plastics campaigner Nina Schrank described it to The Grocer: “The infamous Pringles tube has long been a recycler’s nightmare.”

It’s a positive step then that Pringles owner Kellogg’s this month announced the trial of two new crisp tubes made from recycled paper – one with a paper lid, the other plastic.

But is Kellogg’s going far enough, fast enough with the new can? And is the new pack really as eco-friendly as the company makes out?

Schrank says that a “redesign was long overdue”. The Recycling Association first called out Pringles for its packaging in 2017, to which Kellogg’s responded a year later with what the association called a “fudge of a recycling scheme”.

In partnership with TerraCycle, consumers wanting to recycle the cans had to sign up to a programme (now fully subscribed), collect enough cans to fill a box, then print off a label and arrange for the box to be picked up by UPS. Alternatively, they could search for a participating drop-off point.

Given the burden on consumers, the impact has been minimal. A website explaining the initiative says 212,583 tubes have been processed to date – a scratch on the 27.8 million units sold in the year to February [Nielsen].

The rollout of the new can appears similarly half-baked. The fresh packaging will be used only for 200g Original packs, in only a small number of Tesco stores in East Anglia, and only for a period of six weeks.

Ellin says he’s already seen a flaw in one of the redesigns: the continued use of a plastic lid. And the PolyAl lining that remains, Ellin understands, means the cans are still more than 5% contaminated – over industry preferred levels. Greenpeace would rather see a greater focus on Pringles’ reusable steel tube trial, which ran in Italy late last year.

Pringles is understandably cautious about broader availability. The crisps have a shelf life of 15 months and must “be protected against being broken to ensure we can meet shopper expectations”, a Kellogg’s spokeswoman says.

“At this stage it is too early to say whether we’ll roll out this new paper tube. However, the information we collect will help us understand if people like it and if it works on the supermarket shelf and at home. This trial will help us create the Pringles can of the future,” says Pringles VP Miranda Prins.

“We can potentially make this can at scale,” she adds.

But moving slowly is wasting time that Pringles stockists, and indeed the planet, can’t spare.

“We are working at speed with our suppliers to remove packaging where we can, and reduce what we cannot remove, to reuse more and to make sure the packaging we do use is recyclable,” says Sarah Bradbury, Tesco Group quality director. The supermarket – like many of its rivals – has made bold commitments to reduce packaging and its environmental impact in the next few years.

Indeed, Kellogg’s has its own ‘100% reusable, recyclable or compostable packaging’ commitment with a target of the end of 2025.

A slew of recent reports has re-emphasised the damaging effect of human consumption on the planet. Kellogg’s and its rivals will need to be bolder, campaigners say.

“This small step forward, which is only on a trial basis, doesn’t go far enough. A multibillion-dollar food giant like Kellogg’s has the resources to do what all major manufacturers should do, and that’s looking at reusable solutions instead of just churning out more throwaway packaging,” Shrank says.