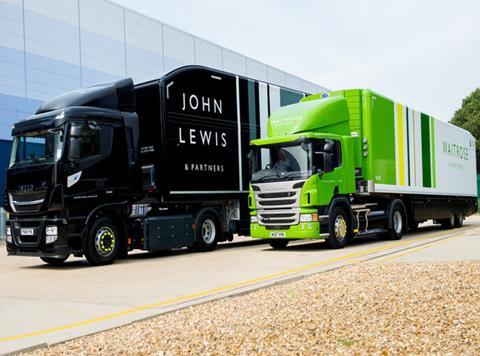 JLP has been trialling biomethane-fuelled trucks since 2015, which can run for up to 500 miles and emit over 80% less CO2

Waitrose and John Lewis are to phase out all diesel-powered heavy trucks from their fleets by 2028 in a bid to slash carbon dioxide emissions.

Parent company JLP, which has been trialling biomethane-fuelled trucks since 2015, claimed the move to introduce 500 vehicles powered by the low-carbon alternative would save more than 49,000 tonnes of CO2 each year - equivalent to the carbon footprint of just over 6,000 UK households.

Produced solely from food waste and waste materials, one tank of the renewable biomethane is said to enable the trucks to run for up to 500 miles and emit over 80% less CO2.

HGV emissions currently account for 18% of greenhouse gas emissions for road transport in the UK, and around 70% of John Lewis Partnership’s transport emissions, the company said.

The announcement comes during the government’s Green GB Week and as six Waitrose delivery trucks currently trial zero-emission refrigeration units as part of a low emissions freight and logistics trial.

“We have been pioneering the adoption of long-distance biomethane trucks in the UK and scaling this up to our entire heavy truck fleet will deliver significant environmental and operational benefits,” said John Lewis general manager of central transport, Justin Laney.

“Five biomethane trucks produce the same emissions as one diesel lorry and they are also much quieter, helping reduce not only greenhouse gas emissions and air pollution but also noise pollution in our cities.”

Claire Perry, minister for energy and clean growth, said the UK had led the world in cutting emissions whilst growing its economy.

“Ten years on from the Climate Change Act, the first ever Green GB Week is a time to build on our successes and explain the huge opportunities for business and young people of a cleaner economy,” she added.

“I’m delighted to see how many more businesses and organisations such as the John Lewis Partnership are seizing this multi-billion pound opportunity to energise their communities to tackle the very serious threat of climate change.”