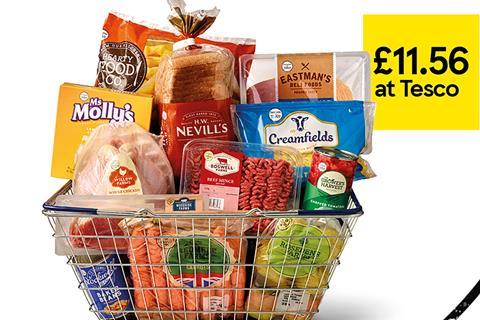 Tesco has insisted its latest push towards everyday low prices is not a ‘price war’ and rejected claims suppliers haven’t been given enough time to respond.

The supermarket unveiled its latest pricing strategy last month, telling branded suppliers they would be expected to match Aldi prices, and promotions would be canned unless they come under its Clubcard loyalty scheme.

Suppliers claimed last week they had been given just days to agree to drop their prices, with one predicting the upcoming negotiations would lead to “plenty of blood on the carpet”.

However, writing in The Grocer this week, Tesco chief product officer Andrew Yaxley said the supermarket had been talking with its suppliers about the shift to everyday low prices “at the most senior level” for the past five years.

“This isn’t new: it’s the next step in a journey we are already on with our suppliers. However, we cannot ignore the reality of the crisis that we are still in – and so we need to move quickly in order to help our customers.”

Yaxely also denied Tesco’s new strategy was ‘anti-brand’. “We support brands today, and we always will in the future too,” he said. “But what we are doing is asking questions about the wisdom of stocking different pack sizes and variants which serve only to feed a rolling promotional plan, rather than meeting a real customer need.”

Tesco didn’t see its latest move as a ‘price war’, he added. “It should come as no surprise to anyone that we would want to be as competitive as possible on price for our customer.”

Tesco: why our push for low prices isn’t anti brand

Ex-buyer Ged Futter, a director at The Retail Mind, a consultancy specialising in GSCOP training, has questioned whether the negotiations represent ‘reasonable notice’ and ‘variation of supply agreement’, given the deadline Tesco has imposed.

“You have been asked to rip up your business plan, completely start from scratch and come up with a new cohesive plan in less than 10 days,” he wrote in a LinkedIn post. “But don’t forget that [Tesco’s] their deadline, their time frame, their pressure, you don’t have to accept it, you can pass it back.”

But despite such concerns around Tesco’s new strategy and the 10-day deadline, Groceries Code Adjudicator Christine Tacon told The Grocer she had so far received no complaints.

“Suppliers need to tell me if they believe there have been breaches of the Code, but so far all I have heard about this situation appears simply to be the start of a tough negotiation,” she said.

“The Tesco CCO is fully aware of what is going on and would like to hear immediately from any supplier that thinks the Code has been breached so the issue can be addressed quickly. And so would I.”

A supplier source added that in all negotiations suppliers should focus on what the supermarkets are offering in return.

”Ask: what do I want in return? If it means getting rid of your competitors that’s a conversation worth having. Or more presence in store. Most growth is mechanical. The more space the more growth. It’s really simple. If they give you more space you get more sales. You have to be clear. Don’t accept losing. Be really clear what you’re going to gain.”