Sainsbury’s wins by a huge margin with full availability 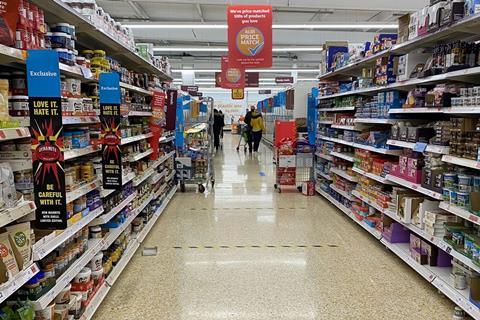 Sainsbury’s Cannock store was in a league of its own this week with an impressive haul of 91 points, leaving it well clear of the rest of the pack.

The stellar performance gave Sainsbury’s its fourth Grocer 33 service and availability victory in the past six weeks.

Our shopper picked up all 33 items, marking the first full basket for several weeks. She was full of praise for the store’s Covid security measures, which helped her feel safe.

The store was tidy and well stocked, and while our shopper did spot a number of stocking trolleys, these did not cause an obstruction.

Although our shopper was able to find most of the items she needed without assistance, the two members of staff she did ask for help were friendly and knowledgeable.

Tesco in Truro took the runner-up spot this week, though with 68 points it trailed Sainsbury’s by a distance.

Overall, our mystery shopper described her visit as “a good experience”. She did observe a lot of restocking taking place and this, combined with narrow aisles, was an issue in terms of navigating the store and maintaining social distancing.

Shop floor service was generally strong and she described the checkout operator as friendly and helpful. She left with 30 items as the pomegranate seeds were out of stock and it didn’t stock the Naked bacon or Strong Roots hash browns.

Third place went to Morrisons in Hadleigh, with 66 points. Its was similar to Tesco on the availability front, with one out-of-stock and three not-stocked lines.

The store was tidy, though our shopper found it quite dark to begin with – a situation that improved halfway through her shop when more lights were turned on.

The staff members she approached for assistance were mostly quite helpful, though not all checked in the stockroom and one just pointed in the right direction.

The biggest concern for our shopper was a member of staff doing stock control, who leaned across her “with no concern for social distancing or my personal space” and indeed made contact with her as he checked a barcode.

First impressions were not great for our shopper at Waitrose in Wimbledon. She described the car park as narrow and while there were no queues to get into the store, it was busy and there were no obvious signs of crowd control. She also spotted an unmanned stocking trolley in the foyer.

The store, like the car park, was narrow and made getting around quite complicated. Her encounters with staff were positive, however. And there was just one out-of-stock and five not-stocked lines. The store scored a total of 55.

Asda in Mitcham only racked up 49 points, and that was despite not having any out-of-stock items.

Like Waitrose, the shop got off to a bad start. The first two trolleys our shopper opted for had no handles and a number of the trolley bays were poorly stocked. In other areas, trolleys were abandoned, blocking the way for shoppers and forcing them to walk into the path of traffic. There was no organisation at the entrance and no sanitiser in that area either.

There was a security guard present but our shopper did not see him taking any action. In fact, she felt this was the case for staff in general – one team member she asked for help simply waved in a general direction without breaking stride or saying a word.