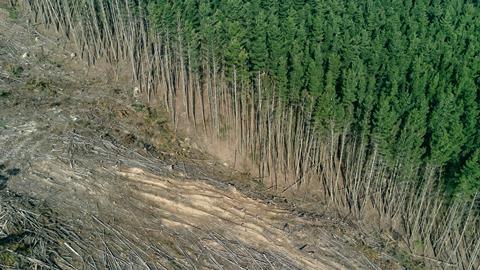 Tory MP Chris Grayling has found a new lease of life since joining the backbenchers. Derided as “failing Grayling” for his ignominious disasters while in Cabinet, he has since reinvented himself as something of an environmentalist.

First, came his love of hedgehogs – “Britain’s favourite animal,” apparently – as he launched his campaign to have them listed as a protected species in the UK’s environment bill.

Now he has turned his attention to Brazil and its atrocious record on deforestation. Calling a parliamentary debate on the issue yesterday, Grayling called on the UK government to take a lead in tackling the issue, primarily through trade.

“The UK should not countenance even starting discussions with Brazil about a free trade agreement while the current situation continues,” he argued.

Grayling also urged the UK to explore the use of “tough tariffs on relevant Brazilian food exports” until there is clear evidence the Brazilian government is taking steps in the right direction. (Banning foods under environmental reasons has previously been impossible under WTO law, though there are signs this is changing.)

Given his record in government, it’s easy to dismiss Grayling’s comments. His influence within the Conservative Party is limited, similarly among the public. But as an ardent free-trader and supporter of ‘global Britain’, his stance on limiting trade ties with Brazil could be telling.

It is inevitable that the UK’s climate agenda will increasingly rub up against its trade agenda as it looks to seal trade deals with countries with questionable environmental records. Many European parliaments have met this dilemma through the EU-Mercosur trade deal and rejected the agreement as a result.

The question for the UK is: having witnessed the backlash against the Australia deal, is it bold enough to enter a similar path with Brazil when it’s not only farmers and campaigners, but its own free-trading backbenchers such as Grayling that are opposed?

Grayling’s opposition to Brazilian trade will be sown in fertile ground. Many rural Tory MPs are currently uneasy over the UK’s trade policy, given their farming constituents’ reaction to the Australia trade deal, and this is unlikely to lessen if a Brazil deal moves into the spotlight.

There is an ever-growing growing consensus that the UK can no longer stand back and ignore what is happening in Brazil. This raises an interesting question to food businesses over the stance they choose to take.

Last month, nearly 40 food companies, including supermarkets and food producers, opted to plant a flag in the ground by pledging to boycott Brazilian products if the national congress passes a bill to increase the speed of deforestation in the Amazon.

The bill is still awaiting passage through the Senate and so we await to see whether the threat will be fulfilled. But there are already question marks about the sincerity of some parts of the industry in tackling illegal deforestation abroad.

The Guardian reported last month that some food brands and trade associations had challenged the government’s proposed due diligence requirements that will require companies to take firm steps to address illegal deforestation in their supply chains.

In a consultation on the proposed policy, while the likes of Unilever, Nestlé, and the British Retail Consortium urged ministers to strengthen the law to ban all deforestation-linked imports, not all parties were so supportive, documents obtained from a Freedom of Information Act request revealed.

In Westminster and beyond, there is a growing convergence that the environmental crisis trumps free trade and profit making and so it is surely now a question of when, not if, further trade restrictions are imposed in this vein. It falls to each food business to ensure they come down on the right side of history.