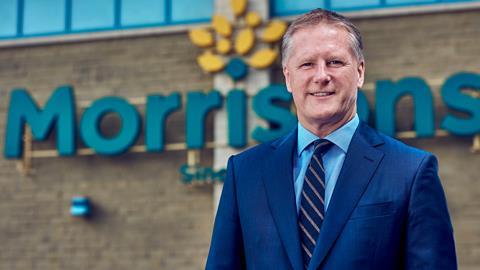 Morrisons reported a 64% spike in champagne sales today and it’s a fair bet CEO David Potts and his management team have accounted for one or two glasses of the fizzy stuff themselves, given the supermarket’s near double digit like-for-like growth over Christmas.

The extent to which Morrisons’ sparkling performance can be seen as a barometer for the entire supermarket sector will become clearer over the next week, as other retailers deliver their festive figures. But the Kantar numbers that came out this morning point to Morrisons as the biggest winner among the big four retailers (alongside Tesco), with cheap champagne (as little as £9 a bottle) only one of the ingredients of its success.

Supermarkets are understandably being low-key in their celebrations given the backdrop for other most sectors – and society as a whole – is just about as grim as it gets. But there is more to Morrisons’ success than simply a Covid windfall.

Yes, like other supermarkets, it has benefited from the shutdown of the out-of-home and hospitality sectors, one that sadly looks like it could last until Easter.

But it would be wrong to regard Covid-19 as a straightforward shot in the arm for all food retailers.

So what has Morrisons done to improve trading? After all, it wasn’t long ago that Morrisons was being branded a laggard, alongside Asda, compared with Tesco and Sainsbury’s, thanks to the lack of a convenience store estate.

As Potts revealed this week, the closure of cafés and haemorrhaging fuel sales have added a further £10m to Morrisions’ costs since the lockdown measures of December, more of which are to come. Morrisons alone expects its total costs from the pandemic for the financial year to soar close to £300m.

Yet, even after returning its business rates (like most of the rest), Morrisons is on course to at least match its £420m-£440m expectation for the year, prior to its payback to the Chancellor.

That has much more to do with canny leadership than circumstance, with Potts’ recipe proving in tune with the times, which he described in the first lockdown as like being on a “war footing”.

From launching a food box operation helping vulnerable but non-internet savvy shoppers, which will by next week have delivered its 600,000th order, to becoming the first retailer to offer its car parks to be used as vaccination centres, Morrisons has managed to juggle an eye for PR gains with a sense of authenticity about its strategy, underpinned by a focus on the bigger picture and wider community.

Offering immediate payment to suppliers hit by the crisis and discounts to NHS and other frontline staff such as teachers (and an increased discount for colleagues) are among the initiatives to have hit the right note. Morrisons has undoubtedly enhanced its credentials as a community retailer, often doing things the old-fashioned way.

Yet at the same time, the retailer has trebled its online capacity, albeit from a lower base than some of its rivals. In doing so, it has turned what was once an Achilles heel into a source of real growth and, crucially, according to today’s announcement, profitability.

Morrisons is no longer reliant on Ocado. It has significantly grown its services with Amazon (of which there is surely much more to come), as well as last mile providers like Deliveroo, who are at the cutting edge of what could be a lasting shift from out-of-home to grocery sector spending.

Nor is Potts bothered about being first. As he said: “During the crisis we haven’t tried to be first. Just to be fast. And it turns out they usually mean the same thing.”

Today, Potts touched on another battleground that could see Morrisons flourish when he issued an appeal for major suppliers to source more of their food from Britain, rather than mainland Europe.

Quipping that he preferred to see biscuits made in “Pontefract rather than Honolulu”, Potts again opted for the no-nonsense approach that has served Morrisons well over the course of the pandemic.

He stressed the “all British” credentials of many of its product categories and urged other suppliers to move more of their production to the UK to improve food security.

Either he genuinely fears the relative calm that has descended on Dover compared with the all-out chaos over Christmas won’t last, or it’s another canny publicity move that plays to Morrisons’s strengths. Perhaps a bit of both.

But one thing is for sure. Potts is quietly, thoughtfully and speedily making the right moves at Morrisons. And it’s really paying off.