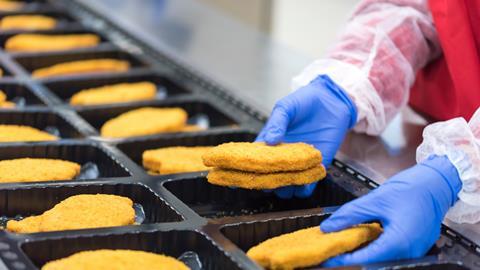 The food and drink industry has had plenty of proud moments during the Covid-19 crisis. Potentially sending the entire population of Anglesey back into lockdown isn’t one of them. According to today’s reports, a major coronavirus outbreak at a 2 Sisters food factory – which has resulted in more than 150 cases, at the last count – has put back plans to reopen schools in the area.

This marks the third outbreak in a week affecting food factories. An Oscar Mayer site, again in Wales, and a meat plant owned by Asda in West Yorkshire, have also shut their doors in the past few days.

Worryingly, unions claim at least five other factories have suffered serious outbreaks that have yet to come out into the open, though surely if this is correct it can only be a matter of time.

Union fears over staff safety are nothing new. Doubts have persistently circled around the safety of food production factories, especially those such as meat plants where working practices make social distancing difficult. Last month, we saw the tragic deaths of three workers from coronavirus at a Cranswick food processing facility in Barnsley and the death of a Moy Park worker in Northern Ireland.

In April, the GMB union reported that staff had walked out at factories in Swindon and London, run by DHL and Bakkavor. Both companies strongly denied breaching government guidelines.

The latest outbreaks have prompted fresh questions on whether companies have done enough to enforce social distancing measures. Unions have warned that low-paid staff (often those for whom English is a second language) have too often become the hidden victims of the crisis, rather than the hidden heroes.

Such scrutiny, however, should not just be aimed at the employers. Once again the lack of clarity and leadership from ministers, which has characterised the nation’s Covid-19 response, looks to have played more than a small part.

A full eight days before the first case was uncovered in Anglesey, MPs on the Environment, Food and Rural Affairs Committee heard how food factories were being starved of proper protective equipment and confused by inadequate advice from the government and PHE. This warning did not come from union firebrands, but FDF boss Ian Wright – who said food workers had been subjected to fear and confusion because of “unbelievable” delays in government advice over face masks and social safety procedures.

A raft of senior industry figures accused the government of an “inexplicable” lack of guidance on face masks and social distancing. They also slammed delays in the testing system, which meant some employers were waiting 10 days for their results at the time.

Faced with such warnings from unions and the industry alike, the government needed to ensure far more standardisation of safety rules and protective measures in stores and in factories. But too often, it has fudged its guidance and delayed for the right political moment.

So it’s little wonder, as The Grocer reported last week, that there is mass worker unease over the government moves to ease social distancing by scrapping the two-metre rule, which looks set to be announced by Boris Johnson tomorrow.

Sadly, in too many instances, workers have been unclear on the rules anyway, as the rising number of cases from food factories appears to show.