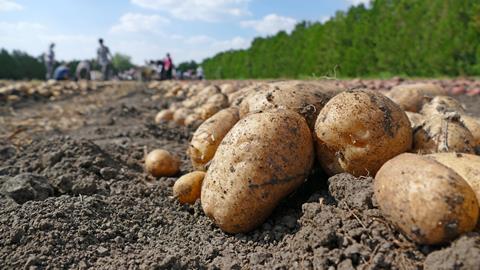 McCain is leading the way, but others must follow to protect British farmers

Biting the hand that feeds you can never be a sustainable policy. And those in the growing sector must feel like their hands have almost been bitten to the bone by the processors and retailers they supply.

This sentiment was expressed this week by apple grower trade body British Apples & Pears, whose rather irked executive chair Ali Capper warned margins were becoming “untenable” due to the simultaneous squeeze of increased operational costs and the impending supermarket price war.

Growers would “stop investing in the future” if they didn’t see better returns, she warned. This is shorthand for ‘packing everything in’.

The situation isn’t unique to apples and pears, Capper said, as proven by her other role as the chair of the NFU’s horticulture board. Growers everywhere are having a tough time. That can only last so long. Indeed, if you look at the economy even more widely, businesses with nose-diving returns – such as Byron and Pizza Express – are shutting up many a shop.

The litany of woes facing the growing sector make for dispiriting reading. There have been two consecutive years of appalling weather, including an ice storm that would make Ranulph Fiennes reconsider a polar expedition, an earth-scorching heatwave and then a winter that was wetter than McFly’s comeback single.

Add to that the introduction of the national living wage, Brexit-related labour shortages and concerns over trade, not to mention the coronavirus pandemic, and it’s a wonder growers haven’t spontaneously combusted.

So, it must have come as a relief to farmers yesterday that finally someone was stepping up to give them a helping hand. McCain announced its ‘Potato Farmer Pledge’ – a £25m fund designed to help future-proof British potato farming.

Yes, it’s only for potato growers, but it could show a way forward for fruit & veg processors and – whisper it – retailers.

It includes a grant scheme whereby growers can get help with investment in more climate-proof infrastructure, such as lighter self-propelled harvesters that don’t get stuck in the mud as easily as older models; as well as a loyalty scheme to help growers with the banks. It would also see McCain undertake a reappraisal of contracts to ensure growers receive more of a return.

The motivation for this meritorious move was, according to McCain UK & Ireland head honcho Howard Snape, just as much about supporting itself as the growers.

“We need the potato farmers to succeed for our business to succeed,” he told The Grocer. He hopes this move will restore grower confidence and remove elements of conflict, and is open to further funding should the UK’s increasingly extreme weather hit crops again.

But as Snape also pointed out, McCain – while a very big business in its own right – “can’t do this alone”.

While other processors and supermarkets could all do more if they weren’t currently focused on Covid-19 firefighting and the looming retailer price war, they also need incentive from the government to take action.

By repeatedly refusing to put a protective ring in the form of written legislation around British agriculture when it comes to trade policy, the government has practically given the green light to sourcing more fresh produce from abroad. Countries with lower standards and lower wages will probably be able to undercut our domestic producers, who in turn won’t see much point in continuing to grow food.

And this is what the government, supermarkets and processors alike need to realise – if they are as keen on British produce as many say they are, they’re going to need to start following McCain’s lead. Otherwise, there will not be a UK hand left to feed them.