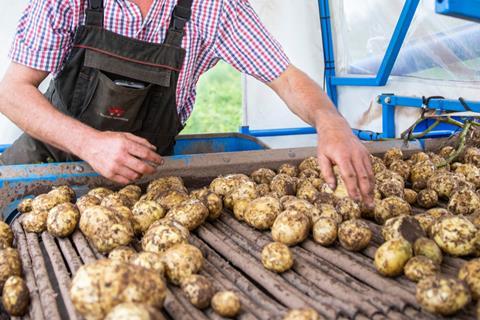 McCain will make funds available over the next five years

McCain has announced a £25m investment in potato farming aimed at future-proofing the industry.

The frozen chips giant said 40% (£10m) of the money would be provided this year to help farmers recover from two consecutive poor harvests and the coronavirus pandemic. The rest will be made available over a five-year period.

The main elements of the package include a three to five-year loyalty scheme – under which McCain would be locked into contracts, allowing growers to deal more easily with banks and lenders – and a grower grant fund that would see McCain take on 25% of the cost of infrastructure investments, such as irrigation work.

The processor said it had also committed to honouring contracts over the Covid-19 period and ‘optimising’ contracts for early varieties to ensure farms received sufficient returns – a process that would be advised by third-party agricultural consultants.

“At McCain, we are so integrated into both our businesses,” said McCain GB & Ireland regional president Howard Snape.

Snape said so far there had been 83 applications for funding from McCain’s grower base.

“Growers need all the support they can get to have the confidence to grow into the future,” she said. “We look forward to working with McCain to help ensure that British potato production has a strong and sustainable future.”

Looking back over the lockdown, McCain said it saw a 40% spike in volume sales during the initial panic-buying phase, and had received unexpected praise for fulfilling its orders, according to Snape.

“I had a couple of retail MDs ring me up to say thank you - I’ve been in the industry 20 years and it’s unique to get someone ringing you to thank you for maintaining supply,” he said.

While the initial shutdown of foodservice had led to the furloughing of some of its staff, Snape said 95% of them were now back at work.

Between 60-85% of McCain’s foodservice customers, including major QSR outlets and pub chains, were back online thanks in large part to the government’s “very positive” ‘Eat Out to Help Out’ scheme which started last week, he explained.