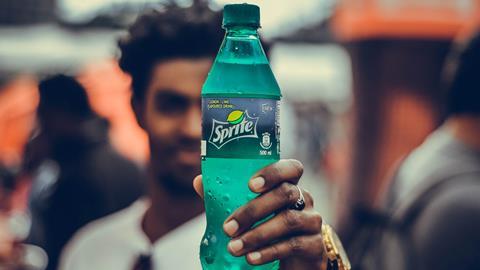 After almost 60 years, Coca-Cola is ditching its green Sprite bottle, with a new, easier-to-recycle transparent pack to hit shelves in September in the latest move in the war on plastic.

But it’s soft drinks manufacturers, more than their products, who have been looking noticeably paler than normal of late, such is the pace of the campaign to rid stores of their packaging.

Today’s move shows how enormous the pressure is on businesses to be seen to be acting much faster – and at least this one is highly visable.

Coke arguably announced an even bigger move today, though one perhaps less immediately noticeable to consumers, revealing its entire Glacéau Smartwater range will be in plastic bottles made from 100% recycled PET plastic by the end of the year. The move will take more than 3,000 tonnes of virgin plastic out of circulation every year, it says.

But with the likes of serial campaigner Hugh Fearnley-Whittingstall trying to persuade us the smart move is to ditch bottled water altogether, does this go far enough?

Worryingly for soft drinks manufacturers, they have emerged from the crisis of the soft drinks tax only to find themselves engaged in a fight for survival for the bottled water sector, which of course is an area the likes of Coca-Cola moved into to avoid being too exposed to the war on sugar.

The trouble for Coke, which is on track to double the amount of rPET used in all other plastic bottles in early 2020, is that the Blue Planet effect has made plastic so toxic there is a real danger these reductions simply don’t register with many consumers.

The almost daily announcements by suppliers and retailers of plastic reductions, or moves to use more recyclable material, are testament to the good work they are doing – but also to how difficult it has been to convince the public that the industry is tackling the scandal of ocean pollution.

And it is not helped by a government that has been busy coming up with soundbites about getting tough on plastic, to divert from its other woes, rather than coming up with a joined-up plan to deal with the issue.

No wonder there are desperate calls from the soft drinks industry for ministers to pull their fingers out and get on with creating a sustainable new recycling system, with DRS at its heart.

Manufacturers need to convince a sceptical public that the infrastructure exists to allow a closed loop for recyclable plastic that works, otherwise the momentum to get rid of plastic altogether, regardless of the economic impact of companies, will only gather pace. It will be too late to put the genie back in the bottle – or the Sprite, for that matter.