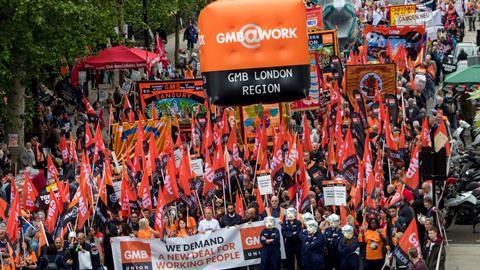 There can, of course, be no massed ranks of protesting workers and union placards – social distancing won’t allow – but the issue of union power has taken an interesting twist amid the coronavirus crisis.

Already this week, about 80 GMB members downed tools at a warehouse in Swindon supplying M&S.

Whereas last week the story was very much of the industry working as one to tackle the national food crisis, it is now seeing workers pitted against bosses, with accusations flying in both directions.

Is this a case of the unions capitalising on a time when they have businesses over a barrel? Or have the unprecedented demands of dealing with the outbreak exposed staffing safety measures as falling woefully short of the mark?

Good luck trying to get agreement on that.

All this is, of course, human nature coming into play – a bit like the retailers point-scoring over who is paying their staff the best rate right now, after a series of supermarket pay announcements this week – further evidence the ‘we’re all in this together’ mentality is already coming under strain.

But while whose hastily approved bonus is most attractive will remain up for debate, we can surely agree on two things. First, the safety of staff on the frontline of this crisis is paramount. Second, but no less important, businesses have to do all they can to keep the supply chain running, with millions of Brits effectively stuck at home waiting for the system to right itself, at least to a degree, so some sort of normality can be resumed.

This is why, yet again, strong leadership is needed from government, as well as businesses and union leaders.

We need transparent rules on exactly who should and shouldn’t be working and likewise equally clear rules on the protection they have when they do.

This includes police knowing if they should be stopping workers on their way to a factory driving a car, or whether that is allowed in this emergency.

It includes stopping pressure being put on factories to close, if they are expected to remain open by the government.

But It also includes far more standardisation of safety rules and protective measures in stores and in factories – even if some of those measures will surely have to wait until the equipment and regulatory supervision is available.

It’s beholden on both unions and employers to work together on these issues – and fast.

Thanks to the industry responding fantastically to the initial wave of this crisis, it looks as if retailers have come back from the real crisis point of panic buying, which at one point looked in danger of ending very badly indeed.

Now, as one industry leader puts it, it’s the job of “keeping the factories open for the long haul” that counts.

And the last thing the industry can afford now, with a medically driven workforce crisis looming, is a drawn-out, politically driven one.