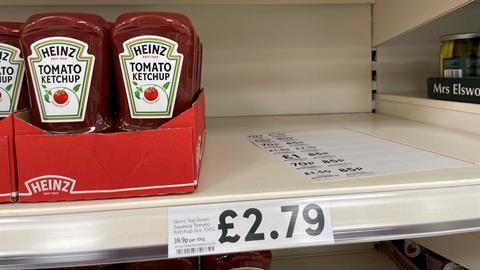 Who will win the battle between Tesco and Heinz?

It’s a clash of two heavyweights.

In the red corner, we have the UK’s biggest supermarket, Tesco. In the blue, the creator of Britain’s most famous tinned food and the world’s best-known ketchup – a bona fide, multinational fmcg behemoth: the one and only Kraft Heinz.

As The Grocer revealed this week, the two are at loggerheads over price increases, leading to growing gaps on shelves after Heinz pulled its supply. So who’s likely to win?

Tesco’s refusal to entertain price increases it deems “unjustifiable” from major suppliers is nothing new. Unlike other retailers, it isn’t afraid to leave gaps on shelves to prove a point – something it has done before the pandemic or the cost of living crisis. The UK’s biggest supermarket plays a good game of chicken.

Take its mass delisting of Heineken SKUs in 2017, which led to massive losses in off-trade value for a swathe of the supplier’s biggest brands. At the time, both Heineken and Tesco were tight-lipped as to whether it was a pricing row or simply a move to bring the retailer’s range in line with modern tastes that led to the delistings.

Then there was Haribo, whose products temporarily vanished from Tesco in late 2020. More recently, there’s Colgate, which almost entirely disappeared from Tesco shelves in February in what appeared to be a fallout over prices.

This battle with Heinz feels different, though. Arguably, more is at stake.

Not only is Heinz one of the UK’s biggest food brands, relied on by families across the nation for a host of different needs, but it comes as the full scale of the cost of living crisis is emerging.

Shoppers are paying serious attention to the price of everyday goods. Pushing prices too high on an everyday staple could mean losing business to another multiple – or a discounter. If Tesco is seen as being on the side of consumers by squaring up to Heinz, it could give the supermarket a serious popularity boost – especially considering prices for Heinz goods have already risen in other retailers.

Is that fair? Inflation, after all, is not just suffered by shoppers but by businesses too. Costs are surging across the board.

Ultimately, this is about what kind of price is justifiable in these chaotic times. It’s fair to suggest that the addition of 30p to the cost of a single can of Beanz, or £1 to the price of a 4x400g pack of Cream of Tomato Soup in some cases, is going to be immensely frustrating for Brits already feeling the crunch [Assosia 10 w/e 27 June 2022].

Tesco is adamant it can push against these increases, instead staying the course with its own-label products and other brands such as Branston. Heinz, of course, has leverage thanks to its size and popularity – but any fmcg professional knows the chaos that losing space in the UK’s biggest retailer can wreak on a balance sheet.

It may be that neither wins the battle for consumer hearts. Many may be wondering why one of them – or both in agreement –  doesn’t simply do the honourable thing and take a hit to keep prices low and availability strong at a time when people are suffering and being pushed into poverty.

Whatever happens, this could very well set a precedent for other suppliers’ approaches to negotiating with the mults.

In the ring of negotiations, the fight is about to get tougher.