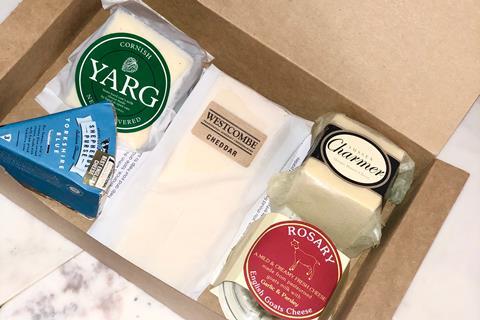 Waitrose has launched a special British cheese selection box in a bid to support struggling artisan suppliers in danger of going out of business after being hit by the coronavirus crisis.

Earlier this month, trade body Stilton Cheese Makers Association urged consumers to buy British cheeses, with revenues at suppliers flatlining as a result of the closure of the foodservice and hospitality industry during the national lockdown.

Sales of stilton have plunged 30% during the virus outbreak, with a knock-on effect for dairy farms supplying the producers.

The crisis in the cheese industry also led this week to Tesco teaming up with Jamie Oliver to support two British farmhouse cheesemakers hit by the pandemic. And independent supermarket chain Booths launched a campaign in April to support British artisan cheesemakers struggling to survive.

The new Waitrose ‘best of British’ selection box, which is priced at £15 and available at all of its 251 stores with cheese counters, is filled with five of the retailer’s most popular British artisan cheeses: Westcombe Cheddar, Sussex Charmer, Yorkshire Blue, Cornish Yarg and Rosary Garlic & Herb Goat’s Cheese.

Waitrose said the move was designed to help its small-scale producers, who normally rely on the cheese service counters for business.

“We recognised this trend and quickly adapted our approach to ensure our smallest cheese counter suppliers had the opportunity to sell their products in packaged form so that they didn’t lose out to the fast shopping habits adopted by customers in recent times.

“The response has been great and our customers are already returning to our cheese counters as a result of a greater wrapped assortment, which has allowed them to choose from a wide variety of cheeses while giving them the flexibility to grab and go.”

Waitrose has continued to stock products from its smallest cheese suppliers and keep its counters open throughout the lockdown, selling prepared cheeses without need for assistance from staff.

“The flexibility that Waitrose has shown through this period has been vital, not only for our sheep farmers, who have also been greatly impacted by Covid-19, but for the future of our business,” said Shepherd’s Purse MD Caroline Bell.

“Yorkshire Blue is a key national product for us and had we not been able to sell at a normal capacity, we would be in a far different situation. As it stands, while there is still work to be done, we are now trying to reach a place where we can bring back our furloughed staff, and are very optimistic about the future.”

Lynher Dairies owner Catherine Mead added small businesses such as artisan cheesemakers had really struggled in the first four weeks of the pandemic.

“With a limited route to market due to much lower numbers shopping at counters, it’s no exaggeration to say that many such businesses, including ourselves, were at stake.

“Fortunately, thanks to our own processes and the flexibility from Waitrose’s buyers, we have been able to adapt and put our product on the counter pre-wrapped, meaning our loyal customers will be able to find us over the next 12 weeks, and even giving us the potential to attract new ones who prefer to pick and go.”