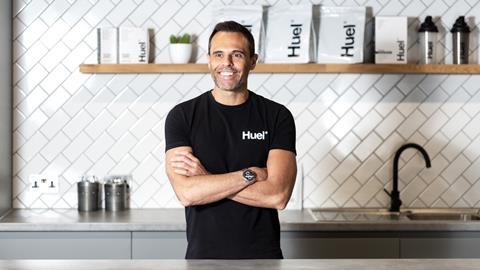 Big Interview: Julian Hearn – how Huel became a hit and how he’s evolving it

After marketing stints at Tesco and Dial a Phone, Hearn has really hit the big time with his latest venture. What’s the plan?

When it comes to food and drink, “taste is absolutely non-essential” asserts Julian Hearn. “You can live a perfect life with no tastebuds. That’s fact.”

It’s a “fact” that flies in the face of food industry wisdom, but Hearn is clearly on to something. Huel, his futuristic, nutrition-led, direct-to-consumer business was “constructed on a spreadsheet, not in a kitchen”. And in four years, it has become an international success story, with sales of £40m and a target of £200m within the next three, bagging ‘Entrepreneur of the Year’ at The Grocer Gold Awards earlier this summer in the process.

So what exactly is Huel? How did it come about? And where is Hearn taking it?

The name is a portmanteau of ‘Human + Fuel’, and the aim is to provide ‘nutritionally complete food’ (though rivals in the space also call it ‘future food’, ‘complete nutrition’ and ‘smart food’).

Just don’t call Huel a meal replacement brand. “Beans on toast is not a meal replacement for chicken casserole; it’s food, and no one would argue with that,” Hearn says. “So why should Huel be called anything but food or a meal?”

With a growing portfolio of powdered meals, snack bars, granola and ready-to-drink shakes, Hearn is meeting an unmet need, he insists. “It’s quite bizarre how nearly every single foodstuff in the supermarkets is prioritised for the wrong reasons. The fundamental purpose of food is to provide nutrition. You cannot live your life if you don’t have the correct nutrition.”

“Originally, we were ‘Nutrition first’ and that was it. Now, we have to focus on taste as well”

Potted CV: Left school at 16. Worked in a shop, then as a labourer. Studied marketing for five years, then got a marketing job at MFI. Freelanced as a marketing contractor before joining Tesco and then Dial a Phone. Set up PromotionalCodes.org.uk in 2008, followed by Bodyhack and then Huel.

Business mantra: If it don’t fit, force it.

Career highlights: Selling my first business for a multiple of the £2.5m annual profit, bootstrapping Huel to a £40m run rate, and winning Entrepreneur of the Year at The Grocer Gold Awards 2019.

That said, his black and white viewpoint has had to be tempered somewhat. At Huel’s Tring HQ there’s a sign on its wall that reads, ‘Nutrition first. Taste a close second’ but it’s relatively new messaging, Hearn admits. “Originally, we were ‘Nutrition first’ and that was it. Now, we have to focus on taste as well” if the brand is to continue growing, he concedes.

And growth is very much the focus. Since launching in 2015, it’s sold 50 million meals via a DTC model and found its way into more than 80 countries, including the US, home of Huel rival Soylent.

A rollout to China last October came after the brand received £20m for global expansion from a funding round led by venture capital firm Highland Europe. That was followed by a Japan launch in early 2019.

“It’s been our fastest growth country ever,” Hearn says. “Geographically, it’s quite a small country, which means distribution’s quite easy. It’s densely populated, lots of people live by themselves, and they work some of the longest hours in the world. It’s the perfect country for us. Why we didn’t launch there earlier, I don’t know.”

Japan having “taken off like a rocket”, Huel’s annual sales target is £200m within the next three years. “We think that’s very doable. The headroom for penetration is high.” And that’s without moving into any more countries, says Hearn, who also doesn’t anticipate the need for more fundraising. “We’ve been profitable, and we think we’ll be profitable again this year,” he adds.

Not that last year’s cash injection wasn’t welcome. “It’s been useful to us. We’ve been able to bulk buy some ingredients, which has saved us money. We’ve been able to build a very nice office to attract talent, and we’ve still got money in the bank - so it’s a massive insurance policy for us.”

Instead of seeking more investors, Huel has chosen a different channel: a debut on the high street to drive impulse purchases. By the time you read this, the brand’s RTD shakes will have begun a rollout to Sainsbury’s.

“We were always going to go into store,” Hearn says, while also insisting Huel’s growth ambitions could be achieved without going beyond DTC.

His is a bullishness borne of a largely successful history of entrepreneurship. It began 40 years ago, at just seven years old, when he and a few mates took to selling plants to passers-by.

“We cleared out [Mum’s] greenhouse. She came back from work and the whole lot was gone.”

But it wasn’t until 2008 that he set up his first real business. Having left school at 16, and later doing stints in marketing roles for the likes of MFI (where he set up the e-commerce arm), Tesco.com, Starbucks, Waitrose and the now-defunct Dial-a-Phone, a chance meeting with “some guys making serious money” from affiliate marketing (promoting products and services in return for a commission) inspired him to set up PromotionalCodes.org.uk.

Within three months, Hearn was earning more a month than at his previous job. In 2011, having made £2.5m profit, he sold the business to an unnamed American company for an undisclosed amount (thought to be in the region of £7.5m to £10m).

Then came Bodyhack, a comparison website for workout programmes and meal plans. It helped Hearn slim down to 11% body fat at the age of 40, but it failed as a venture at a cost of around £80k. The problem was the plans were too complicated, too time-consuming.

The solution was Huel - set up in Aylesbury with nutritionist James Collier (now the brand’s head of nutrition) for around £220k of the PromotionalCodes sales money.

Starting with powders made from the likes of peas and brown rice, the aim was to “get all essential nutrients into a single product, and make it vegan so it’s better for the planet”, says Hearn. “The livestock industry produces more greenhouse gases than planes, trains and cars combined, which is quite scary.”

Since Huel’s 2015 debut, the future food category has exploded, he says. “It’s absolutely on fire; there’s probably about 100 brands across the world now. It’s very interesting, and the good news is, all of us are passionate about nutrition.”

Was there a time at the beginning when he was worried powdered meals and the like wouldn’t work?

“No,” he says quickly. “But I never thought it would get this big.” His plan had been to simply run “a lifestyle business to keep me busy three days a week” and make about £500k a year. In the end, he found himself working “seven days a week for two years. Then I hit a bit of a burnout stage. I really struggled.”

It was at that point (in late 2017) that he handed his CEO role to James McMaster, the former boss of Up&Go owner Life Health Foods UK.

“He’s done a great job for us,” says Hearn. “He’s a different character from me: he’s quite calm, he’s got a good background in operations, he’s numbers-orientated.