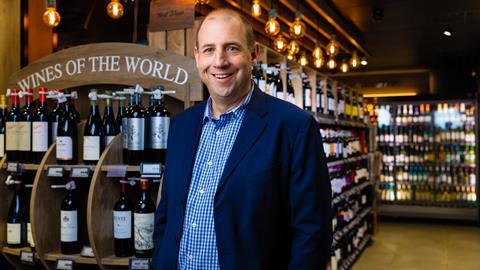 Darcy Willson-Rymer steered Costcutter through the wreckage of P&H’s 2017 collapse. Now his mission critical is to make Costcutter the most loved symbol group – and to help convenience to thrive

If I was a cat, I would have used up all nine lives,” says Costcutter CEO Darcy Willson-Rymer. He’s looking back on the collapse of wholesaler Palmer & Harvey, which nearly took Costcutter with it.

It’s been just over two years since P&H bit the dust, giving Costcutter just two hours’ notice that it would no longer be delivering to its retailers. Willson-Rymer describes the aftermath as “the most difficult and challenging time” of his career, but also a period he looks back on with pride, having subsequently set Costcutter on what he sees as a new and better path.

The series of unfortunate events that led to the demise of P&H can be traced back to March 2013 and Willson-Rymer’s fateful decision, just over a month into his role at Costcutter, to call time on the symbol group’s 25-year relationship with Nisa. When the switch was made to Palmer & Harvey in July 2014 it was immediately beset with problems. Availability was poor and suppliers railed at the added complexity. In the year before P&H’s eventual demise, availability issues became so acute retailers left in their droves.

Most observers will tell you Costcutter should never have left the comfort of Nisa, so does he regret the original split? “At the time everybody felt we had no choice but to leave Nisa,” he explains. “We understood P&H wasn’t perfect the way it was, but the plans we had agreed with P&H meant they would take the Costcutter volume in, and that would generate sufficient cash for them to make the necessary investments and we would learn and grow together. In fact it just didn’t happen: they weren’t able to make the investments they needed.”

Ultimately, it was external events that brought about the end of the P&H dream. “The game-changer in the market was Tesco acquiring Booker,” he states. “Once that decision was made it became clear that rather than all the independents coming together and pooling our volume to buy and distribute together and give us the scale of a supermarket, instead Tesco-Booker meant the volume was going to consolidate underneath the grocers. Indeed, that’s exactly what happened subsequently, with Co-op buying Nisa and Morrisons supplying McColl’s.”

Willson-Rymer says this was then the trigger for its decision to pull the plug on its deal with P&H and move to a new supply deal with the Co-op. The plan had been for a 12-month notice period with P&H, he explains, but in November 2017 P&H collapsed.

“As the CEO, everybody is looking to you saying ‘so guv, what do we do?’ But actually the tribute goes to our retailers and colleagues who, in the face of great adversity, came together, pulled out all the stops and performed miracles,” he says.

While challenging, Willson-Rymer claims: “If you talk to the retailers now they will say this is the best version of Costcutter we’ve ever seen in the 30 years we’ve been with you.”

Potted CV: Started out as a waiter at Pizza Hut in York and went on to spend 19 years with Yum Brands. Worked for three years at Unilever Ventures as MD of Persil Service. In 2007, took on the post of MD of Starbucks UK & Ireland before becoming CEO of Clinton Cards in 2011 and joining Costcutter in 2013.

Charitable work: Took over as chair of anti-people trafficking charity Stop the Traffic this year after seven years as a trustee. He says: “Working in a world where human beings are bought and sold, I have a fundamental issue with that and feel I need to do something about it.” Stop the Traffic works entirely in the area of prevention and has a mission to put an end to the trade entirely.

Ironically, some of this is down to being back in the Nisa supply chain, thanks to Co-op’s £137.5m purchase of the buying group. Availability is strong but Willson-Rymer is keen to point out that it is not a case of reverting to business as normal, and that Costcutter is now a completely changed company.

“Once we were in that system I spotted the immediate single focus of how to help our retailers survive was over, and it was about being ready to give direction to the company and say ‘here is the next phase’,” he says.

Key to this is the Shopper First insight programme, launched in 2017, which Willson-Rymer describes as market-leading. “It is not a static thing as such but rather an umbrella programme based on a set of principles. It is grounded in the knowledge that 90% of the customers in the trade zone of a convenience store will visit once a year or less, and what we are doing is giving retailers the knowledge, skills and tools to talk to the 90% and get them to come in more often.”

To do this, Costcutter is using sophisticated data analysts to develop store-by-store plans for ranging, merchandising and marketing – and it’s working, says Willson-Rymer. Costcutter will provide a full financial update later this month, and while he would not reveal exact numbers, he indicates the results will show sales improving following a 23.8% decline in 2018, a year in which store numbers fell from 1,776 to 1,560 in the immediate fallout from P&H. With the decline arrested, he adds that currently the stores joining the group have twice the average weekly sales of those leaving.

“We don’t have a set target for store numbers. Our ambition is to be the most loved symbol group and we want to do that ultimately by helping independent retailers. We also want a thriving independent convenience sector. We think that is mission critical.”