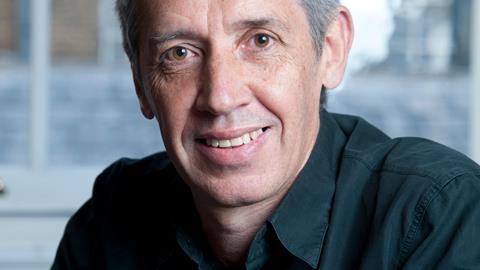 The Hubbub founder has taken flak for his commercial approach to sustainability. Now he’s upsetting the waste management industry, too

Hubbub was the result of a “belated mid-life crisis”. Or so says founder and CEO Trewin Restorick – only half jokingly – as he remembers launching the project with just £2,500 to back it up in 2014.

It all started with a simple proposition: “Can we take environmental issues and make them relevant, interesting and engaging to the majority of the population?”

If the engagement Hubbub has achieved since is anything to go by, the answer is yes. And it couldn’t be further away from the brainchild of a crisis.

Collaborating with some of the world’s biggest corporations, Hubbub looks and works like a slick creative agency and is “passionate about good design and good behaviour change”.

It’s so slick, in fact, that many wouldn’t guess at Hubbub’s charitable status. “People are surprised because we look like a comms agency,” Restorick says. This was a conscious decision. From the off, its logo “couldn’t have a globe, couldn’t be green”. “We don’t fit into any of those buckets,” he says.

At the same time, he’s clear that Hubbub is a charity to its core. “I wanted to make sure it was truly about the impact and purpose,” says Restorick. As such, it shares results “good and bad” and early on committed to “not being bothered if somebody stole our ideas, because it was the change we want to see.

“I can wholeheartedly say to everybody, the directors don’t get paid, there’s no shareholders taking profit out. Everything is about the charitable purpose,” he adds.

For Restorick, that unusual combination of charitable aims and media savviness has been key to its success.  Its initial activity – which saw Hubbub hold a small festival in Oxford encouraging visitors to eat their Halloween pumpkins, to curb the millions that go to waste ever year – exemplifies this approach. The media coverage was significant, thanks to journalists “fed up writing about Halloween”. Plus, it led to an all-important first partnership – with Ikea.

Soon, the corporate clients came flooding in. Hubbub now counts the likes of Starbucks, Costa, Danone and L’Oréal among its partners, alongside Tesco, Waitrose, Lidl and M&S on the supermarket side.

Restorick believes these partnerships come down to Hubbub being a bit different from much of the charity sector. “A lot of corporates tend to view environmental charities as tree huggers that will give them a hard time,” he says. “It comes with baggage.”

That doesn’t mean Hubbub is any less scrupulous than its peers. Restorick is picky about his partners. “We’re turning more and more away. Because we think it’s greenwash. Or what they want to do is not really the answer to the problem,” Restorick says.

Business mantra: Don’t be afraid of failure. Give it a go

Career highlight: The community fridges. I went to a town recently and there was a fridge with a queue of people waiting for it

Career mistake: I once launched a sustainable lifestyle magazine. It would do brilliantly now but at the time, I lost a shitload of money

What are you reading: Diary of an MP’s Wife by Sasha Swires. It’s shocking. If you want to know why we’ve made so many bad decisions politically, read it

Still, the charity – and Restorick himself – gets flak from its choices. “You look at a company like McDonald’s or Coca-Cola and most environmentalists’ instant reaction will be ‘evil’!” Restorick says. Take Hubbub’s recent drone litter scanning project with McDonald’s. “I’ve got quite a lot of abuse for that,” he admits.

Although Restorick can understand the kneejerk reaction, he would rather encourage the likes of McDonald’s to play a part in solutions. “Wouldn’t you rather a company that’s prepared to be a bit innovative and invest, that recognises it has a role to play?

“We’re not bashful about who we work with and we’re always transparent about where the money comes from,” he adds. “We do get kicked by the green groups quite heavily for that. What they don’t know is the companies we say no to!”.

The criticism hasn’t just come from green groups, either. Sometimes the public has proven tricky. In a campaign to tackle the issue of discarded cigarette butts, it designed a voting ashtray – a two-compartment bin with a multiple choice question: ‘Place your butt in this side for option A, and here for option B.’

Watching the trial in action brought some tough lessons. “We spent three very painful nights on the street, watching and getting abused, seeing young men throwing butts on the floor,” Restorick recalls.

But the campaign yielded results with sports-focused questions such as, Who is better: Ronaldo or Messi? “We stacked the bins so Ronaldo looked like he was winning, even though Messi was the better player at the time,” he says.

It worked. Within six weeks, the first bin installed in a busy London street reduced litter from cigarette butts by 20%. The campaign has since been replicated across the world – thanks to a spin-off social enterprise selling the bins – and been proven to cut litter by up to 46%.

Hubbub’s community fridge network, established in 2016, has enjoyed similar success. It works on an element of trust: people and community organisations fill the fridges with surplus food, which is picked up by those in need. “Everyone was like, ‘you’re crazy, the system’s going to get abused, what about food safety?’, blah, blah, all quite legitimate,” Restorick recalls. “And they’ve just worked astonishingly.” Indeed, the fridges will number 200 by the end of this year, and last year redistributed the equivalent of over four million meals.

The latest project for Hubbub is Food Connect, a surplus food last-mile redistribution service that collects unwanted food from retailers, divides it out and couriers them by electric vehicle to community groups. During the pandemic, it has delivered direct to the vulnerable and isolating in Milton Keynes.

Restorick sees multiple benefits. It helps retailers – few charities can supply a volunteer to pick up surplus at late-night closing time – and ensures food safety, preventing food being “kept in the boot of a car for a day”.

He’s ambitious about its potential. “The model we want is all of these retailers paying for waste disposal. It’s not an expensive service, so therefore if they all contribute a bit of what they pay, they can cut food waste and have it seen to properly,” he explains.

Are commercial waste disposal operations annoyed about it? “I think they are, but they don’t talk to us directly about it,” Restorick says. “We are trying to disrupt the system. And to be frank the waste management companies in the UK have needed somebody to disrupt them for a long time,” he adds.

He’s ready. “I’m comfortable if I think it’s genuinely impactful. I don’t go out to be unpopular,” Restorick says. “But sometimes you have to break something to put it back together differently.”