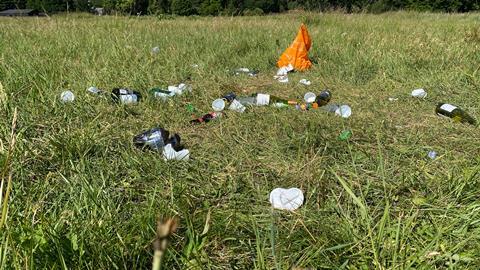 The Easter weekend saw public parks up and down the country covered in plastic wrappers, drinks bottles and takeaway containers – the eased lockdown restrictions seemingly taken as a licence to litter. Barely a single beauty spot escaped untrashed, except two parks in Nottingham, and only because they had been closed by the council to avoid the “appalling scenes” in the weeks proceeding.

Throughout the pandemic, litter levels have “rocketed” in parks and the countryside, according to CPRE, the countryside charity. It commissioned a YouGov survey that found more than a third of Brits had seen an increase in litter near their home since the start of the pandemic. And its survey of parks in Essex found nine out of 10 in the county covered in packaging litter, with 43% of the sites strewn with discarded alcohol containers.

Why are things getting so bad? The CPRE is far too kind to the litter louts in its assessment.

The littering is “more negligent than wilful, probably reflecting a lack of familiarity with how to use open spaces” the charity says. “People who were used to socialising in cafés, bars and restaurants would not be familiar with the different conventions that apply” – i.e. a waiter won’t be coming to clear up your mess.

It also makes a more pertinent point: that consumers are picking up more single-use containers through fear of infection so have more trash in hand. Indeed, just shy of half of respondents to a recent Grocer survey thought some form of packaging was safer than none.

Plus, councils have been struggling to empty public bins fast enough, which doesn’t help. Although, depressingly, Cardiff Council said “bins were left unused” by revellers over the weekend in Cardiff Bay.

What’s the solution? A better understanding of the abominable behaviour is much needed.

Enter a partnership between McDonald’s, its supplier Britvic, and several packaging producers with environmental charity Hubbub and Bournemouth, Christchurch and Poole Council. They’re working on a project that sees drones collect data on dropped rubbish and littering hotspots.

The “intervention” will “help improve behaviour and encourage those people who do litter to act more responsibly”, says Helen McFarlane, senior sustainability consultant for McDonald’s.

It’s not a new idea. Walt Disney used to give out free candy at the entrance to Disneyland to see how far people would walk before dropping the wrapper. Hence you’re never more than 27 feet from a bin in any of the Disney parks. But the drone project – the first flights of which took place late last month – promises a much deeper understanding.

That understanding is vital as CPRE’s CEO Crispin Truman admits “we cannot rely on people’s good will alone” - something made clear by the litter-strewn parks of the weekend. He believes government intervention is needed.

That is coming, albeit slowly. The government’s plastic straws and stirrers ban started – after months of delay – in October. But extended producer responsibility (EPR) is not due to come into force until 2024. And the deposit return scheme (DRS) will be delayed until the end of 2024 “at the earliest”, the government said late last month, because of Covid disruption.

Meanwhile UK councils issued 37% fewer fixed penalty notices for littering last year than in 2019, due to Covid challenges around enforcement, according to InYourArea.co.uk.

So in the absence of tougher government measures, anything the industry can do to tackle waste is more than welcome. Because the pandemic can’t be used as an excuse to dodge the issue. It’s only making the need for action more immediate.