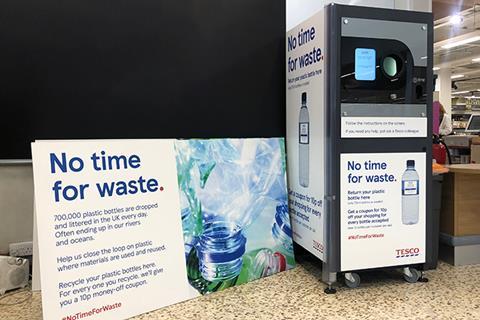 The UK government has announced plans for a deposit return scheme (DRS) will be delayed until the end of 2024 “at the earliest” because of the “unimaginable” impact of the Covid pandemic on the industry.

The move, which The Grocer exclusively revealed in December was on the cards, was met with fury by environmental campaigners, with the government announcing it would be holding a rerun of its 2019 consultation on the plans.

The new 10-week consultation will consider again whether DRS should include all drinks bottles and containers or be aimed at single-use ‘on the go’ drinks, despite former environment secretary Michael Gove having backed an ‘all in’ system as far back as 2018.

However, other announcements were widely greeted by campaigners and the industry alike, with the government revealing it planned to give the DRS scheme administrator powers to set a flexible deposit for the scheme, unlike plans in Scotland where a fixed rate of 20p has been mooted.

Yesterday also saw the launch of the official administrator for the scheme north of the border, despite it also facing rollout delays, which, as revealed by The Grocer in February, will see a powerful umbrella body of many of the UK’s biggest retailers and suppliers come together to run the system.

The administrator, which includes companies such as Coca Cola, AG Barr, Nestlé, Sainsbury’s and Tesco, is also planning to launch a bid to run a £2.5bn turnover company to run the system across the UK.

It has emerged talks with the Scottish government have been stepped up in a bid to try to launch a joined-up DRS system, which it is hoped could prevent huge confusion over labelling and a major problem of cross-border fraud.

The announcement of the new consultation is the latest in a rollercoaster history of DRS proposals.

In 2018 then-environment secretary Gove announced plans for a DRS as early as 2020, although a year later the government said it would be brought in for England, Wales and Northern Ireland in 2023.

Last year The Grocer revealed how retailers and suppliers had told ministers they were “too busy trying to survive” during the pandemic to take on the predicted £2.2bn cost of installing an estimated 30,000 DRS machines across the UK, and in December we reported ministers had agreed to put the scheme back until 2024 at the earliest.

The consultation said the government “recognises the Covid-19 pandemic has disrupted the economy and society in unimaginable ways, with many people reassessing their values, decisions and priorities in both the immediate and longer term”.

“With this in mind, we have had to reassess what a realistic timeline for implementation of a deposit return scheme looks like, ensuring sufficient time is given for a successful rollout of the scheme. We therefore anticipate that the introduction in England, Wales and Northern Ireland would be in late 2024 at the earliest.

“We believe this revision presents a realistic yet equally ambitious timeline to implement a complex but incredibly important policy in the most effective way possible.”

Meanwhile the launch of the not-for-profit DRS administrator in Scotland, called Circularity Scotland, was hailed a “game-changer” for the future of DRS across the UK.

“We have long advocated for a well-designed deposit return scheme to help make this a reality in the UK and the appointment of Circularity Scotland as the DRS administrator is a watershed moment,” added Grant McKenzie, MD for Nestlé Waters UK.

Tony McElroy, head of waste campaigns at Tesco, said the supermarket believed a DRS system would play a key part in its battle against plastic.

“It is a truly positive step towards our shared vision to protect the environment now and for generations to come,” said Judith Batchelar, director of public affairs at Sainsbury’s.

Environment secretary Rebecca Pow announced yesterday the government planned to give the administrator of the UK scheme “flexibility” over the deposit set under DRS, whereas ministers in Scotland have proposed a set rate of 20p.

Pow said the government planned to set a minimum and maximum charge for deposits.

It follows widespread fears a fixed rate fee could inadvertently increase pollution by encouraging the public to switch to larger bottles.

The move was welcomed by BSDA director general Gavin Partington, who said: “We have always said the value of the deposit should be determined by the industry-led, not-for-profit scheme administrator in order to meet its targets.”