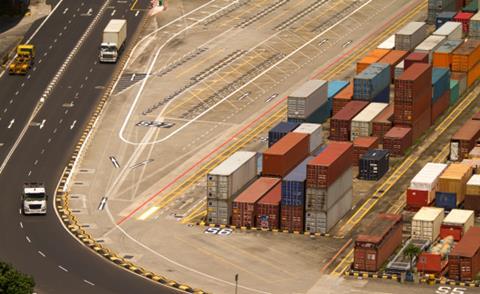 It comes after council staff at Larne were withdrawn from their duties with immediate effect. Mid and East Antrim Borough Council said there had been an “upsurge in sinister and menacing behaviour in recent weeks”.

Graffiti appeared in the area last month referencing tensions over the Northern Ireland protocol and describing port staff as “targets”. It is also understood that staff reported individuals taking down their number plate details.

The council said the situation had caused “extreme distress and worry to staff”, and it had “no option but to withdraw them from their duties in order to fulfil its duty of care”.

The protocol has been a considerable issue for supermarkets and food businesses bringing goods into the region, as well as a source of tension among loyalist communities. Police warned last month that loyalist discontent was “growing” over the protocol.

A spokesman for NI’s Department of Agriculture, Environment and Rural Affairs (Daera) said: “On the basis of information received today and pending further discussions with the PSNI (Police Service of Northern Ireland), Daera has decided in the interests of the wellbeing of staff to temporarily suspend physical inspections of products of animal origin at Larne and Belfast.

“The situation will be kept under review and in the meantime full documentary checks will continue to be carried out as usual,” it added.

Checks on food products containing meat, fish, dairy or eggs are among those affected.

Victor Chestnutt, president of the Ulster Farmers’ Union, raised concerns that the supply of food could be affected by the move. “Some of our food companies bring in ingredients from the UK mainland. If they needed checks and those checks are not done, is that going to be held at the port or is that going to be released?”

UK and Irish officials released new guidance last week to help ease pressure on ‘groupage’ movements of mixed loads into Northern Ireland. However, these were dismissed on Monday night as “unclear and not fit for purpose” by RHA CEO Richard Burnett.

“It also fails to address the complexity and overly bureaucratic requirements designed for external trade and not internal within the UK. It does not recognise the shortage of vets.”