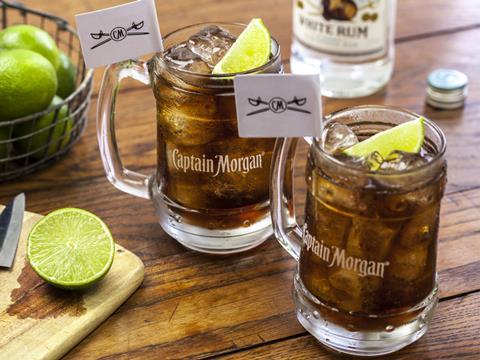 Sales across Captain Morgan’s portfolio of rums surged by £7.8m over the past 12 months, our Britain’s Biggest Alcohol Brands 2018 report reveals

Sales across Captain Morgan’s portfolio of rums surged by £7.8m to £123.2m over the past 12 months, with £6.9m of that growth coming from its Spiced flavour, our Britain’s Biggest Alcohol Brands 2018 report reveals. Which makes Captain Morgan not only the nation’s favourite rum but Britain’s 24th biggest alcohol brand.

Rum sales have skyrocketed over the past year. According to WSTA figures, sales in the UK broke the £1bn mark over the 12 months to 24 March 2017, while value and volume sales rose 31% and 16% respectively over the past four years.

Video: Rum: Can pirates’ plonk become the next craft spirit?

The market had “delivered challenges”, admitted Bacardi Brown-Forman Brands MD Amanda Almond. However, she stressed the brand “enjoyed growth thanks to the launch of new products” such as posh golden rum Bacardi Añejo Cuatro and Bacardi Raspberry. “Bacardi rum has been in existence for over 155 years and we fully intend to add at least another 155 years.”

The category had been “given a boost by the nation’s thirst for craft cocktails”, said WSTA CEO Miles Beale. “Ten years ago there were around 50 rum brands on the UK market, which has now increased to over 150. There are 315 distilleries across the UK making world-class gins and whiskeys and now many are adding rum.”