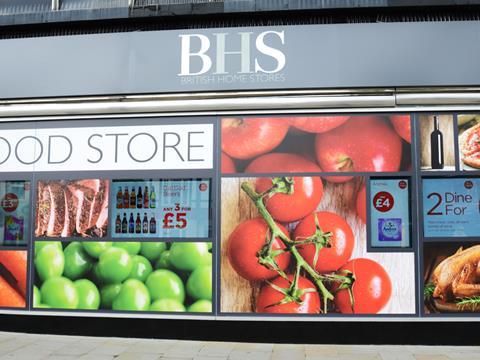 Unsecured creditors of BHS, the retailer once owned by Sir Philip Green‎, lodged claims worth almost £1bn in the aftermath of its collapse, according to a report compiled by the chain’s liquidators. A document sent to creditors late last week discloses that a 3.6pm interim dividend - worth a total of roughly £36m - has been paid out by FRP Advisory, which is overseeing the winding-down of what was once one of Britain’s best-known high street brands. (Sky News)

The South African owner of Poundland found some relief from an accounting scandal yesterday by plugging a short-term funding gap. The company raised 7.1 billion rand this week from the sale of a stake in PSG Group, an investment firm, as part of efforts to shore up its finances. (The Times £).

A meat recall affecting UK restaurant chains centres on use-by-dates, officials say. The Food Standards Agency (FSA) said it had stopped any meat leaving supplier Russell Hume’s sites due to “processes around use-by-dates”. Russell Hume said that none of its products had caused illness and the recall was a “precautionary measure because of mislabelling”. (The BBC)

The number of corporate insolvencies edged up last year as businesses faced challenges including rising costs and shaky consumer confidence (The Times £).

The government has failed to take “definite action” following a parliamentary inquiry last year into food standards at the country’s largest supplier of supermarket chicken, a committee of MPs has said. (The Guardian)

He was seen at the sleazy Presidents Club bash, but it was still a good week for the Ocado boss as the firm’s value rises £650m, writes The Daily Mail. “It appears that for its ever faithful investors, Ocado has finally delivered.” (The Daily Mail)

Colgate, the company behind the eponymous toothpaste, failed to brush off underwhelming fourth-quarter sales on Friday, capping a week of earnings announcements that suggests big household brands no longer possess the same draw for consumers. (The Financial Times £)

Fifty eight of the UK’s largest companies have agreed to try and ensure 30% of their senior leadership teams are women by the end of 2020. Those signed up to the 30 per cent Club campaign group include Vodafone, Sainsbury’s and Tesco. (The Daily Mail)

The FT writes of the call to step up coffee cup recycling in battle on plastic waste. The collection of disposable cups must be improved, says chief of UK paper mill Cropper’s. (The Financial Times £)

As big retailers struggle to entice customers through their doors it seems the pressure has led to a rise in chief executives going the other way. Korn Ferry, a headhunter and consultant, said that there were 50 changes of chief executive last year, up from 41 in 2016 and the most since 2012, when the figure was 56. (The Times £)

Marks & Spencer, John Lewis, Debenhams, Next and Sainsbury’s are among a group of British retailers yet to join international rivals in renewing their commitment to a factory safety deal in Bangladesh. (The Guardian)