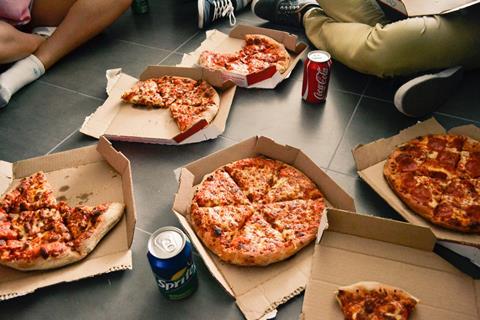 Nielsen analysis commissioned by Cancer Research, exclusively revealed to The Grocer, found almost half (47.6%) of all food adverts shown during September 2019 on ITV1, Channel 4, Channel 5 and Sky1 were for HFSS products.

The study showed ads for out-of-home brands (35%) continued to be the largest source of HFSS adverts from 6pm to 9pm, with HFSS snacks such as chocolate, sweets, cakes and biscuits also featuring prominently, as well as supermarket ads for featuring HFSS products available in-store.

Dr Emma Boyland, senior lecturer at the University of Liverpool, who backed the research, said the months of May and September used to illustrate the HFSS bias were “typical months for food advertising on TV”.

The figures come despite the launch last year of the Eat Them to Defeat Them campaign, backed by the Food Foundation and the likes of Jamie Oliver, which saw ITV and outdoor food companies donating more than £5m towards advertising fruit & veg.

The campaign is running again this month, having been extended to Channel 4 and Sky.

“Veg Power and the Eat Them to Defeat them campaign are great and we need much more of these ads,” said Cancer Research UK policy manager Malcolm Clark.

“Sadly our figures suggest there doesn’t seem to be a collective industry voluntary effort to switch advertising towards heathier products.

“We believe the main thing it shows is that to tackle this market failure the government needs to step in if we are to tackle exposure of children to HFSS advertising.”

It has been almost a year since the government launched a consultation on clamping down on HFSS ads, as part of its strategy to halve childhood obesity by 2030.

It included plans for a 9pm watershed on TV advertising of HFSS products and similar protection for children viewing adverts online, but the plans have faced lengthy delays amid speculation over the government’s next move.

Veg Power campaign director Jo Ralling said: “We want Veg Power to do something new, ambitious and bold. This just the beginning of the journey, but we’ve proven that the power of creative marketing can change things for the better and our children can have healthier and happier lives.”