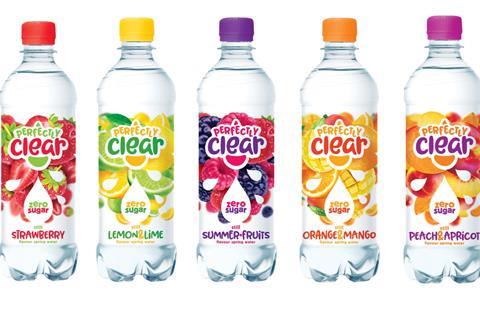 Orange & Mango and Peach & Apricot will join the range

Clearly Drinks is to relaunch its Perfectly Clear flavoured water, making them “a fruitier product”.

The supplier will add more natural fruit flavour and reduce the amount of sweetener, as well as give the lineup a “distinct visual identity”.

The overhaul would attract new shoppers to the flavoured water market by offering “a healthier choice to sugary juice and carbonated drinks” Clearly claimed.

Perfectly Clear’s Red Apple, Cherry and Elderflower variants are to be delisted, while the remaining Summer Fruits, Strawberry and Lemon & Lime will be joined by the new Orange & Mango and Peach & Apricot flavours.

The new-look range is set to hit Waitrose, Nisa and Farmfoods next month, followed by Sainsbury’s in March.

Clearly Drinks head of marketing Susanne Wright said the revamped Perfectly Clear would prove “a big hit with families” due to its zero-sugar and low-calorie credentials.

The move will be backed by a marketing push spanning TV, print, online and PR.