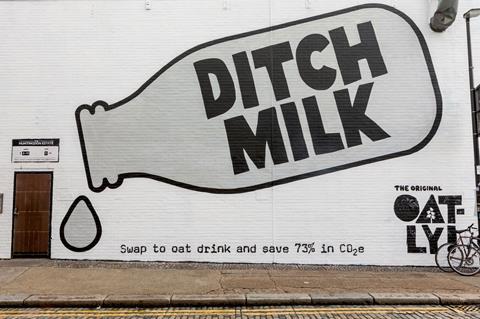 The launch coincides with this weekend’s London Coffee Festival

Dairy alternative brand Oatly has launched what it admits is its most blatantly anti-dairy campaign yet.

Murals bearing the slogan have been painted around Shoreditch, timed to coincide with the London Coffee Festival taking place at the Old Truman Brewery this weekend – at which 35,000 coffee aficionados and baristas are expected.

The £250k campaign will also fund digital activations, posters, banners and billboards across Brick Lane, Old Street and Shoreditch High Street sites. The message will also appear in print media, with ads in Time Out, Foodism, Caffeine magazine and the London Evening Standard.

It follows a “huge success” claimed by Oatly for the ‘It’s like milk, but made for humans’ guerrilla campaign, which saw its messaging go up in London commuter hotspots last autumn. The campaign’s success was such that it resulted in a nationwide shortage of Oatly’s oat drink range, reports said at the time

“Our message to the London Coffee Festival crowd, and anyone else who might be interested in the future, is pretty simple — swap cows milk for oat drink and save the planet,” said Oatly’s creative director Michael Lee.

Oatly got into hot water for its provocative advertising in its native Sweden back in 2015. The brand was sued by dairy co-op LRF Mjölk and forced to remove the ads, though the publicity saw its sales soar.