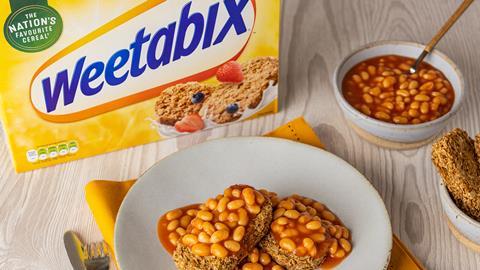 This month the unforgettable image of Heinz Beanz slathered on two Weetabix biscuits was seared into the brains of millions thanks to a tweet from the cereal giant. Love it or loathe it, Beanz-gate was simply inescapable.

Since the tweet exploded, Weetabix’s sales have surged, rising 15% in Sainsbury’s alone in the week following the tweet. The retailer even began merchandising ‘Bix and Beanz together to cash in. Asda, too, created a Beanz & Bix bundle deal on its website. The whole affair was a marketeer’s dream.

So how did Weetabix set about breaking the internet? Was it planned – or just a stroke of social media magic?

The tweet was in fact part of an ongoing push by Weetabix – aided by PR firm Frank – since 2019 to encourage shoppers to use the cupboard mainstay in mind-melting variety of ways, such as spreading butter on it like toast, or using it to coat fried chicken, says Weetabix head of brand Gareth Turner.

In fact, the Beanz combo “wasn’t even the first one we spoke about that week”, he says. Although it was certainly the most “out there”. “We spoke about things like Marmite on Weetabix too, and truth be told there were others lined up to go on social media later that week which we didn’t do,” he says.

Heinz was notified that it was going to be involved in the tweet out of courtesy, but the fmcg giant – which, coincidentally, is currently pushing to expand the Beanz brand into other categories – played no part in its conception.

The truth, says Turner, is that it simply tweeted the right thing at the right time, and struck gold. Marketing gold, for not even a fraction of the price of a traditional ad. Weetabix didn’t even promote the tweet. “One can only imagine the media value for the cost of some salary and a photograph,” quips Turner.

“Illegal combination in the bagging area”

Following Weetabix’s tweet, other food, drink and retail brands jumped on the bandwagon, trading comments and takes. Nando’s, for instance, simply asked ‘you ok hun? DMs open if you need to talk’, while KFC said: “Let’s set aside our differences to prosecute this under the Geneva Convention.”

It was “a masterclass in social media managing up and down the country”, says Turner. “I’m sure it will be a textbook example at some point because of how they responded and stayed on-brand. Sainsbury’s was a highlight, they managed to bring in the Jackie Weaver reference.”

What the episode shows, he says, is how important it is to have trusted social media teams in place who are empowered to make decisions, or to make sure that staff in charge of social media can get posts approved fast. In Weetabix’s case, this is brand manager Elaine Wan, who works daily with Frank PR to ensure the brand’s voice and tone is adhered to.

While we’re upping the breakfast ante… would you pour @innocent over Weetabix for a fruity hit? Milk is so 2020 🥛 #HaveYouHadYourWeetabix https://t.co/eiSgots7H5 pic.twitter.com/a3lKdkEnaX

“You’ve got to feel sorry for all the other social media managers still waiting for approval,” says Turner.

So what’s next? The push to broaden Weetabix’s appeal will continue, says Turner, but he doesn’t want to simply rinse and repeat the Beanz formula – wary that this would alienate shoppers.

“We thought ‘we’ve had our moment, let’s just love it’,” he says. “One gets a moment like this once in one’s career.”