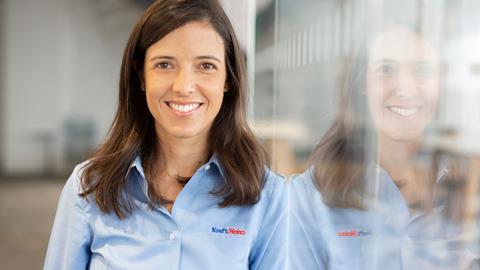 The ‘Beanz Liberation Exercise’ sounds more like a radical paramilitary manoeuvre than a corporate strategy. But it’s emblematic of how Kraft Heinz’s Northern European boss Jojo de Noronha is changing the direction of the fmcg behemoth.

Over the past few months, it has been rolling out a new operating model designed to ramp up “scale and agility”. Before we go any further: De Noronha is aware how generic it is to be talking in these terms in 2021.

“I know this is what everyone in fmcg is saying,” she says. But when it comes to Kraft Heinz, it has a tangible meaning, she stresses. There are big changes happening in how it approaches its operations, NPD and manufacturing. Essentially, it is now “focusing on how people actually buy our food and think about it”.

“Liberating” the Heinz Beanz brand is a core part of this strategy, says de Noronha. As The Grocer revealed earlier this month, it is planning a swathe of brand extensions – including Beanz’ debut in the frozen category – over coming months, with de Noronha expecting some six SKUs to hit the market before the year is out.

“One of the key elements that wasn’t working was that we hadn’t taken advantage of the equity of the Heinz brand. The last five years the company has done well, profitability-wise, but hasn’t brought a lot of innovation to the market.”

“If you don’t bring that relevancy, those consumers won’t be there in the future”

The Heinz brand itself had lost penetration with younger shoppers, she says. “We need more relevancy and things they actually want, rather than old formats like beans and pasta in a can. These are fantastic, yes, but if you don’t bring that relevancy, those consumers won’t be there in the future.”

De Noronha is certainly not short of ambition when it comes to the newly liberated Beanz. She wants to turn them into “the new avocado” by playing up their supposed health credentials. “The biggest new trend is health and wellness food. Stuff that is not just going to fill you but is good for you. And it has to be convenient.”

But it goes further – and deeper – than just getting weirder and more wonderful Beanz SKUs into previously untapped fixtures. Or serving them on Weetabix.

Kraft Heinz is looking at its entire company-wide strategy. Arguably, it’s a necessity given Covid has forced all the fmcg titans to reassess their priorities. Unilever, for example, is going heavy on plant-based and pivoting away from less profitable brands. Princes has ploughed millions into tearing up the NPD rulebook. Across the industry, huge corporates are reimagining everything  from how to engage on sustainability without greenwashing, to how fast they innovate.

It’s plain to see why: Covid has sent sales through the roof but highlighted chinks in the armour of many suppliers, whether that’s a lack of the right manufacturing kit for modern formats, or much-loved brands that just aren’t pulling their weight in sales. As a result, the cash is getting splashed on readying these giants for the next decade, and the message to rivals is clear: kick things into gear yourself or get left behind.

One thing being firmly kicked into gear at Heinz is product development. The company has historically moved slowly and cautiously – especially with its core brands – when bringing new launches to market.

As the Beanz revamp shows – the much-hyped launch of Beanz Protein Pots in January being a prime example – that is no longer true. And it’s not just the flagship product getting that treatment. The past months have also seen Heinz unveil a slew of vegan launches dubbed ‘Plant Pantry’.

It’s all a sign of a new way of thinking. “If you look at our core business, our time to market from ideation was traditionally about two years,” says de Noronha. “Now we are launching things in less than six months.”

It has achieved this in part with the creation of a New Ventures unit, which is being run completely separately to the business’ core product development team. New Ventures has considerably more leeway when it comes to experimentation, and is leveraging co-packers and manufacturers in a new way.

“They are outsourcing nearly every single step of the manufacturing and co-packing rather than using the Kraft Heinz network,” says de Noronha.

“We obviously have huge capability in canning. However, if I want to take the beans out of the can, it would take time and investment to implement a new machine and it could affect the production of core. But if I work with a co-packer who can put them in pots or make a burger, I don’t have to change our layout.”

This, she says, allows Heinz to be more “consumer-centric” rather than “trying to force-fit innovation” into the structures it already has in place. Getting to know your customers better, says de Noronha, also means relying less on traditional retail data sources.

“If you really scrutinise how companies buy data nowadays you will see quickly there are better ways to do it. Just think about Google Analytics – it’s completely free and plenty of companies are not leveraging it as a source of data,” she explains. “If we’re talking about acting like a startup, well, startups don’t buy data like big fmcg businesses, so why are we doing that?”

That doesn’t mean Heinz has stopped buying traditional data completely (a spokesman confirms post-interview it still buys from IRI). But de Noronha argues that simply finding out what’s trending in consumer searches can be just as, or even more, powerful a tool than till roll data.

She says this is a great example of creating “efficiencies as a way to reinvest in the business. Efficiencies come in different forms – it’s not always cost-cutting,” she explains.

And efficiency is going to be key if the UK’s period of economic turmoil continues over the months to come. “It’s not just us, but for any business that sources commodities,” she says.

“Price inflation in commodities is coming and it’s going to affect all of us. We’re going to need to work incredibly closely with our retailers. It will affect the entire industry. Trying to find ways especially through promotions and multibuys to tap in is going to become even more important.”

It certainly won’t be easy for anyone. Still, with its fresh approach to business – and newly liberated Beanz – Kraft Heinz seems primed to meet the challenges of the next decade.

The best business advice I’ve ever been given: There is a great book called The Ride of A Lifetime by Bob Iger, who was the CEO of Disney. He said the most important element of corporate life is to focus on people.

And the worst: Know all the details. If you know every single detail of your business you are not doing your job as a CEO.

The best book I read recently: Invisible Women by Caroline Criado-Perez. It was a huge eye-opener and showed you cannot solve an over-representation issue with an under-representation solution.

My death row meal: Rice and beans, with water. Nothing complicated.