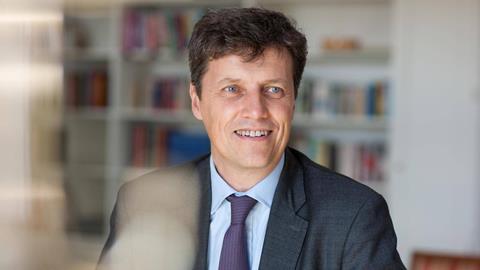 The Barry Callebaut boss was this week appointed Danone CEO

With the announcement of its new boss this week, Danone will have an external CEO and chairman for the first time in its history.

The appointment followed a protracted public battle between the board and a number of US-based funds, including Artisan Partners and Bluebell Capital, who had advocated for former CEO and chair Emmanuel Faber to step down as Danone slipped behind its fmcg contemporaries.

So can de Saint-Affrique help Danone make a swift recovery from the pandemic?

Those hedge funds pushing for change have kept their council on the appointment this week, having previously called for “somebody who is not connected to the past”.

De Saint-Affrique certainly fits that criteria, having led the Swiss chocolate maker and cocoa processor since 2015 and previously spent 15 years at Unilever, including four years as president of Unilever Foods.

His leadership qualities have elicited broadly positive reactions from the City, with Danone shares up 1.3% on the day the news broke. Stifel analyst Pascal Boll pointed to de Saint-Affrique’s international experience and track record of “profitable growth and strong cashflow generation”.

“Danone needs a leader with charisma and a vision. We think he has both these qualities”

Barclays analysts acknowledged he may not be the ‘big name’ some shareholders had hoped for, but commented: “More than anything Danone needs a leader with charisma and a vision. We think he has both these qualities.”

‘Vision’ will certainly come in useful as Danone approaches a point of strategic crossroads.

While the pandemic has seen many of its global fmcg contemporaries post record sales in 2020, Danone has found itself wrong-footed by the new Covid trends. Its sales slumped 6.6%, with a 1.4% drop in like-for-like sales, while its recurring operating income fell 10.9% on a like-for-like basis to €3.3bn.

That’s partly down to its footprint in bottled water. Its Evian and Volvic brands both suffered double-digit value sales slumps in the UK [Nielsen] as out-of-home consumption collapsed.

At the same time, dairy products have failed to receive the same kind of boost other consumer staples have enjoyed.

As the pandemic subsides, it could signal a positive start for de Saint-Affrique’s tenure. Yet Bernstein pointed out the issues facing Danone are not limited to temporary Covid pressures. “Danone’s categories of dairy and water are at the extreme end of commoditisation pressure and after years of under-investment in brands, innovation and capability, [turnaround] success is by no means guaranteed,” it argued.

With that in mind, de Saint-Affrique may be keen to make changes. There were concerns about his ability to do so, given Danone’s commitment to stick to Faber’s ‘Local First’ plan, which will reorganise the company around regional hubs rather than brands.

But those concerns were somewhat addressed by new chairman Gilles Schnepp’s comment that the new boss would have “all the room and resources a CEO can have to best assess and direct Danone’s strategy for the future”.

And history suggests de Saint-Affrique is not averse to making waves. At Unilever, he shook up its brand portfolio. A portfolio shake-up is already underway at Danone, which recently sold its 10% stake in Chinese dairy giant Mengniu to raise €1.6bn primarily to give back to shareholders.

That buyback, coupled with improved post-lockdown conditions for its waters and infant nutrition businesses, at least gives Danone and de Saint-Affrique initial momentum to begin the turnaround process.

“There is clearly much to do at Danone, but we are encouraged by the CEO choice, plus comps ease from here and we think the stock is cheap,” Barclays summarises.

With the shares still 18% down on pre-Covid levels, de Saint-Affrique will have plenty of investor enthusiasm for driving that change.