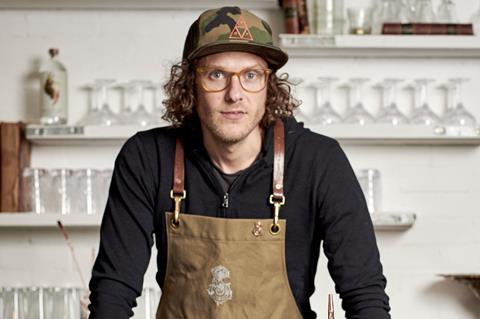 What was your first job? It’s probably a stretch for a first job, but my younger brothers and I running a plum selling ‘business’ for the local village when I was 10 was brilliant fun!

What was the first music single you bought? Parklife by Blur, I think.

How do you describe your job to your mates? “I work for a company that makes distilled non-alcoholic spirits to try and rid the world of horrible sweet mocktails for when you’re not drinking… Yeah, let me say that again.”

What is the most rewarding part of your job? Our team. The chance to work with such a brilliant group of people all over the world is such a privilege.

What is the least rewarding part? We’re now in 25 countries and that means a fair amount of travel. The packing, airports, planes, plane food and hotel rooms is in no way glamorous.

What is your motto in life? Peas & love… surely I’m the only idiot in the world who has had PEAS tattooed on their knuckles.

If you were allowed one dream perk, what would it be? Time travel. Backwards. I love history. The 17th century in particular holds significance for me and Seedlip, so would be great to go back there.

Do you have any phobias? Avocados and blackboards.

If you could change one thing in grocery, what would it be? Seedlip Spice and Garden on the shelves in Sainsbury’s to join Seedlip Grove!

What luxury would you have on a desert island? David Attenborough.

What animal most reflects your personality? A hare - fast, fiercely independent, acutely self-aware, not the most social!

What’s your favourite film and why? The original Willy Wonka and the Chocolate Factory. Roald Dahl is a genius and Gene Wilder’s portrayal is absolute magic.

What has been the most embarrassing moment in your life? Meeting and making Seedlip cocktails for Kate Moss.

Which celebrity would you most like to work with and why? I’d love to create a Seedlip limited edition with David Attenborough, Willy Wonka, Jo Malone and JK Rowling. I think that would be a pretty epic blend of knowledge and imagination!