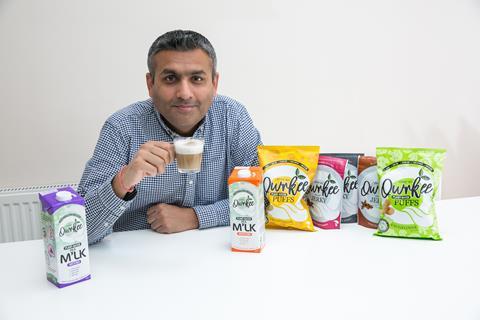 What was your first job? Selling gas and electricity contracts door to door.

What’s been your worst job interview? In one, I was asked the question ‘how would you sell to me to drink more water?’ I could not understand the question at first and after a short silence, I answered: ‘If you are thirsty, drink water’. The sales director of that company said “well done” and just walked off…

What was the first music single you bought? Man in the Mirror by Michael Jackson.

How do you describe your job to your mates? I describe my job as a yo-yo - some days on a high, some on a low, ploughing the ground to create a great platform for a company to grow and flourish in the future.

What is the most rewarding part of your job? Seeing the reactions on customers’ faces when they taste one of the Qwrkee products.

What is the least rewarding part? Startups are challenging with time. Not being able to give enough time to my kids is certainly tough.

What is your motto in life? Never forget where you came from.

If you were allowed one dream perk, what would it be? To have compulsory sleeping breaks for 30-minute power naps during the day.

If you could change one thing in grocery, what would it be? The UK grocery market is changing all the time - including buyers. I would introduce an innovation showcase with each retailer where both suppliers and buyers are able to meet and learn from each other.

What luxury would you have on a desert island? Plenty of drinking water and toilet paper.

What animal most reflects your personality? A phoenix (I know it’s mythological).

What’s your favourite film and why? The Pursuit of Happyness. It reminds me to keep going, no matter what you have or don’t have!

What has been the most embarrassing moment in your life? When my wife had to step in and win me a pool tournament during our honeymoon in Cuba.

Which celebrity would you most like to work with and why? Richard Branson: ambitious and down to earth.

What would your death row meal be? The most basic Gujarati Indian dish, Khichdi, made with rice and lentils.