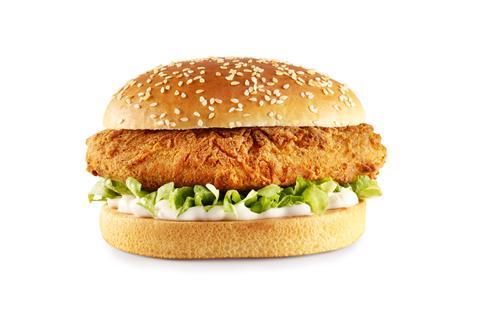 ‘The Imposter’ promises to deliver on “the taste, crunch and succulence KFC is renowned for”

KFC is to trial its first vegetarian and vegan products at 20 of its outlets in England.

The fast food chain will introduce its vegan burger ‘The Imposter’ from next week in Bristol, London and the Midlands. The trial will run for four weeks.

The new meat-free burger (rsp: £2.99) will consist of a “bespoke Quorn fillet” which will be “coated in the Colonel’s Original Recipe herbs and spices” and topped with iceberg lettuce and vegan mayonnaise.

KFC said the move had been prompted by its customers seeking “broader choices” but promised it was “not about to become KFV”.

“Vegans have been cruelly denied the incredible taste of KFC up to now,” said senior innovation leader at KFC UK & Ireland, Victoria Robertson.

“[This] is why we’ve worked hard to perfect The Imposter – a vegan burger that the Colonel would be proud of.”

KFC also announced it would be trialling a new vegetarian option called ‘The Southern Fritter Stacker’ from 15 July in the same 20 outlets. It will be available as a burger, wrap and ricebox.