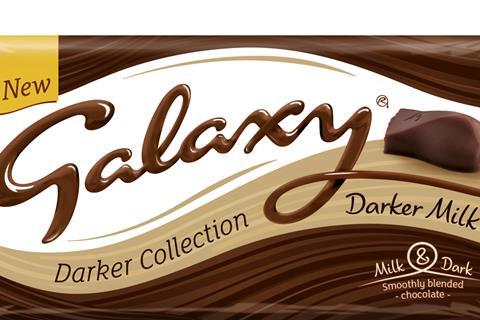 Mars Wrigley Confectionery has followed the example of Mondelez by creating a higher-cocoa version of its bestselling chocolate.

Called Galaxy Darker Milk, the new treat is the result of 18 months’ planning and development. It is a combination of dark and milk chocolate.

Darker Milk is 33% cocoa – a higher content than standard Galaxy’s 25% but lower than the 40% of Cadbury Darkmilk, unveiled by Mondelez last August.

Mars expected its new bar to generate up to £15m in its first full year by tapping the “explosion” in dark chocolate, said Galaxy brand director Sarah-Jane Mellor. Its taste provided “darker, more indulgent cues without the bitterness some people don’t like” she said.

Launched especially for the UK, Darker Milk is set to roll out in original and Roasted Hazelnut as a tablet (rsp: £1.39/110g) and a single (rsp: 66p/40g-42g). It will be backed by a £1.5m digital push including a competition offering prizes of “amazing nocturnal experiences around the world”.