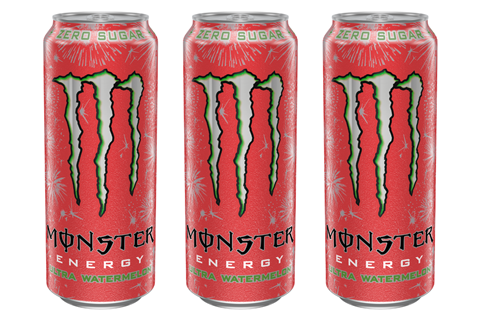 Monster is adding a zero sugar watermelon-flavoured drink and is launching a snowsport-themed promotion for its Ultra range.

Its new Ultra Watermelon is billed as blending “juicy watermelon flavour with the renowned Monster energy blend, giving consumers a delicious, refreshing energy boost with no calories and no sugar”.

The drink will also launch in four-can multipacks, “to capitalise on the continued popularity of the home-based energy drink occasions that accelerated during the pandemic”, it said.

Monster Ultra range was playing “a big part in our low sugar success story”, Attock said. “We know there’s big demand in the market for new and exciting flavours, especially in the low-calorie energy drinks segment.”

CCEP will support the Monster Ultra range through quarter one with a new promotion, offering consumers the chance to win a skiing or snowboarding trip in Switzerland.

It comes after sales of the energy drinks brand surged by £105.9m in the 52 weeks until 11 September 2021, making it the fastest-growing brand in the carbonated soft drinks category [NielsenIQ].

Ultra Watermelon is the latest in a flurry of NPD from the brand over recent months. In 2021, it relaunched Monster Assault and added several new flavours, including a ‘Nitro’ energy drink, Monster Mule, Monster Ultra Fiesta and Monster Juiced Monarch.