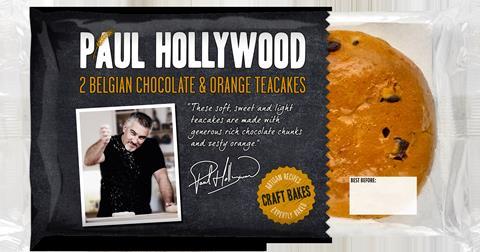 The brand has previously launched part-baked bread and baking mixes

St Pierre Groupe’s Paul Hollywood brand has made its debut in fresh bakery with a range aimed at tapping the trend for craft-style bread and cakes.

They are joined in the lineup by 2 Stonebaked Italian Flatbreads (rsp: £2) made with extra virgin olive oil and “baked in a hot volcanic stone oven to give a truly authentic flavour” according to St Pierre.

The three bread SKUs are available now in Tesco, with the teacakes set to land in stores within the next few weeks.

The new quartet would satisfy demand for “diverse and innovative bakery options” said St Pierre, which has previously launched Paul Hollywood part-baked breads and a selection of baking mixes.

“This fantastic new range is yet another testament to the quality and innovation that consumers have come to expect from Paul Hollywood.”

The NPD comes after St Pierre rebranded itself in March from Carrs Foods and secured an investment of £6.7m from the Business Growth Fund and partner Lloyds Bank, facilitated by Grant Thornton. It would help the bakery company accelerate overseas growth and achieve its ambition of doubling sales in the next three years to £150m, Gilboy said.