Rowse Honey to challenge Nutella with move into chocolate spread 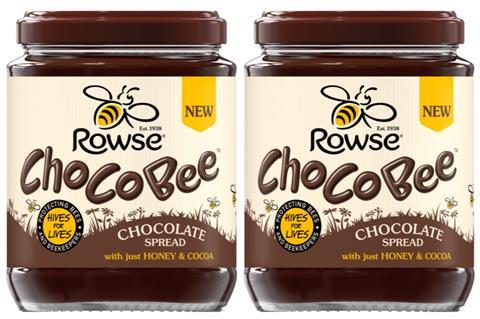 Rowse Honey is set to battle Nutella with a move into chocolate spreads.

Rowse – the UK’s biggest honey brand – has launched ChocoBee, a spread made from a combination of honey and sustainable cocoa, taking it outside pure honey for the first time.

The brand said it had “devoted significant investment” in developing the spread, which was “informed by extensive consumer and market research”, citing “ambitious plans” to grow outside its honey heartlands.

Shoppers were “looking for a chocolate spread that not only tastes great but delivers on their desire to choose sustainable products, meaning no palm oil and 100% sustainably sourced ingredients”, said the brand’s marketing director Kirstie Jamieson.

As well as containing no palm oil, the NPD is certified by UTZ, which is part of the Rainforest Alliance, and is suitable for vegetarians and coeliacs.

Rowse said it hoped to capitalise on upcoming “key dates” for the category such as pancake day. The brand is also touting it as being suitable to stir into hot drinks and porridge.

It will have a tough fight on its hands competing against Nutella, however: the Ferrero brand also grew by 23% last year, rising £11.2m to just under £60m [Nielsen].