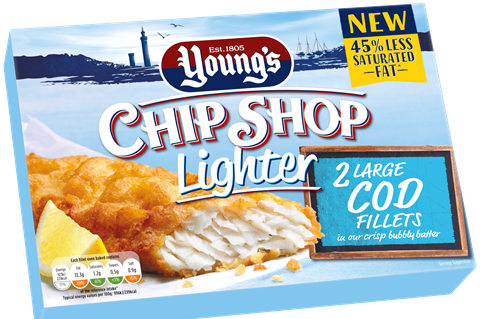 Young’s Seafood is to add a Lighter cod variant to its Chip Shop range of frozen battered fish.

Containing 45% less satfat than the standard Chip Shop range, the NPD was aimed at “more health-conscious” shoppers, according to Young’s.

The Lighter cod will be available in Tesco, Asda and Waitrose from 16 March (rsp: £2.75/220g), backed by a digital ad campaign. Further products under the Lighter marque will appear later this year.

He added that Lighter was part of a “wider investment” by Young’s to reach new shoppers.

So far, this has seen the brand hit TV screens with its multimillion-pound ‘Masters of Fish’ campaign. It has also given its core range a packaging refresh.

What lies beneath: fish category report