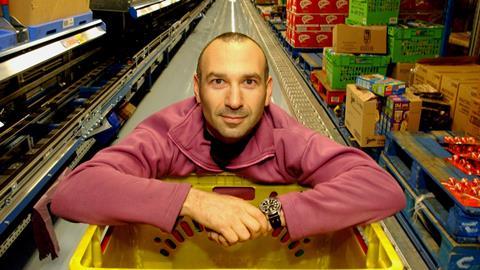 Divorces are almost always painful. But there was added frisson to the Waitrose response, after it was dumped by Ocado last month in favour of M&S.

Plans to triple online delivery capacity at Waitrose were dramatic enough, with the announcement last week that three new state-of-the-art automated customer fulfilment centres would open over the next three years and a promise to target online sales of £1bn.

But heading the tech startup who will develop these CFCs is a co-founder of Ocado, whose fractious relationship with Waitrose, and its imminent termination as of September 2020, is the very reason the plans are needed.

Jonathan Faiman, one of the three former Goldman Sachs bankers who set up Ocado in 2000, resigned as COO in 2008, before unloading a significant number of shares in 2011, when their value was at a low following a disappointing IPO.

In the meantime, CEO Tim Steiner has transformed the fortunes of Ocado, largely within the past two years, supplying its fulfilment technology to retailers across the world and earning unparalleled sums as its valuation soared to £9.6bn and it entered the FTSE 100.

How Waitrose and M&S should prepare for the Ocado switch

It is not difficult to imagine, then, why Faiman, an old nursery school friend of Steiner, might decide to use his expertise to return to automated online grocery fulfilment, especially since his other ventures, including chairing oil exploration company Neos, have not been a success.

But there was more than a little needle about Faiman’s claim last week that he was “more excited about this new venture than anything I’ve done in my career”.

So what is Faiman up to? And what will his new venture do for Waitrose?

Incorporated last year, Today Development Partners (TDP) is so new, “we haven’t got an office yet” a source admits, but it’s “quite a substantial entity already”, with investment from both the John Lewis Partnership and Faiman himself. With the help of co-founder Mo Gowdat, former chief business officer of Google X, it promises to ‘use automation and artificial intelligence to advance the retail industry’.

Waitrose certainly needs the tech firm’s help. It has only one online fulfilment centre, in Coulsdon, serving central and south London. Its national capacity reach comes from the 155 branches that do in-store picking. So whereas Ocado’s fresh produce is likely to arrive with customers “one or two days” after it left suppliers, according to Bruno Monteyne, senior analyst at Bernstein, store-picked goods likely spend “a few days” on the shop floor.

“The issue is, where will customers go when Waitrose’s contract ends?”

Although a second Waitrose CFC, in north London, was planned before last week’s news, Waitrose fears it’s not enough and will have to up its game to attract Ocado customers following the supply switch.

“In September 2020, what are consumers in middle England, who have been using Ocado [for Waitrose shopping] for many years, going to do?”

“The battle here is for the customer,” says the source. “The issue is, where will customers go when Waitrose’s contract ends? Some will go with M&S but many won’t. Waitrose knows that and that’s what this is about.”

Ocado’s contention is that while some will switch, many will be attracted by its customer service, its wider selection of products (over 50,000) and by the M&S selection, which will be available to shop online for the first time. And at this week’s results M&S’s CEO again claimed its prices on equivalent products were 4% cheaper.

But just as the Ocado battle is about more than Waitrose’s 25% of sales, it’s clear that the aim for Waitrose is to grow significantly faster online. It wants to create a £1bn turnover online business within three years.

Not starting from scratch

How does it get there? TDP won’t become an Ocado from scratch in three years, and that is not the aim, says the source. For one, its relationship with Waitrose will be very different. “Jonathan and his team are not going to build CFCs and buy fleets of vans. All the assets and capital will be owned by Waitrose. TDP is a tech IP company which will be assisting and advising.”

In that sense it is not starting from scratch, since “if you want to order Waitrose online you can already do it”.

Brereton notes that JLP already has “quite a lot of innovation going on” behind the scenes, and Waitrose’s CFC, while not near Ocado standards, has “elements of automation”.

The TDP source won’t comment on the level of automation planned, nor developments to Waitrose’s website and app. “I don’t think it would be very wise for us to start talking about that when we haven’t got an office yet.”

A lot of work clearly lies ahead. “You’re going to see in the next few months that people have been hired, a team has been built.” Much of the work will be based at Waitrose’s HQ in Bracknell and “in a year’s time we’ll have lots more to talk about than we do now”.

Adds the source: “Jonathan’s ability to pull together a team and know what to do and attract people to work for him, in this sector, is unparalleled.”

Not everyone is convinced, however. “TDP has come out of the blue,” says Brereton, and Waitrose has yet to clarify “how much the deal will cost, the timeline, even the specific locations. At the moment it seems like a headline grab by Waitrose. It sounds good but the devil will be in the detail.”

Ocado is shrugging it off. “It’s taken us 19 years to get where we are, not just developing the technology but running the retail business in which it’s applied,” says a source at the online supermarket. “It’s a process of trying things until you get it right. That’s where we are and it’s the reason our partners feel very reassured, because they can see the technology they’re buying in action.”

That sentiment was reinforced by M&S chief executive Steve Rowe as the retailer announced its results this week. He admitted “there’s likely to be some friction” with the new Waitrose-TDP partnership “but we have world-leading technology with Ocado”, he said.

“Our prices are about 4% cheaper than Waitrose and we know customers shop with the Ocado brand over Waitrose.”

Ray Gaul, Kantar Consulting senior VP of retail insights, thinks TDP’s real job will be to “minimise the impact” of a “short-term loss”, which will hit both businesses.

Perhaps that’s where the real battle will lie - in who can be better at damage limitation. All the same, with Faiman and Steiner now pitted against each other, the stakes are raised.