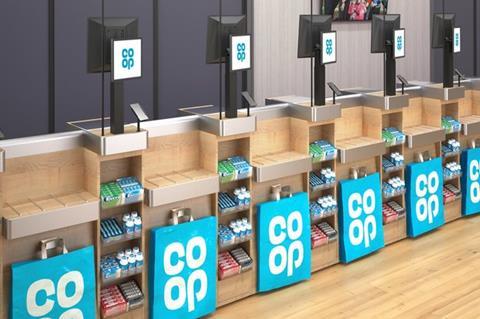 John Lewis’s click & collect service is to be made available in more than 50 Co-op food stores by the end of the year.

The rollout follows a trial in six Co-op stores which began in May.

It means online John Lewis customers will be able to pick up their purchases from Co-ops in Bristol, Cambridge, Derby, Leicester, London, Manchester, Nottingham, Plymouth and Wrexham.

Co-op CEO Steve Murrells said John Lewis chimed with the Co-op’s ethos, adding that the society was “talking to everybody. The resurgence in the Co-op means everyone is phoning us rather than us phoning them.

“JLP is a natural fit with us through their partnering and their colleague co-op, whereas we are a consumer co-op.”

The move was revealed as the Co-op announced its interim results.

Pre-tax profit fell from £44m to £30m on a comparable basis. Total sales increased 12% to £5.4bn, which it said reflected the full contribution of the Nisa business and continued strong performance in food.

Twenty new shops opened in the first six months and 94 refits were developed.

“The growth in like-for-like sales is particularly pleasing given that last year sales were very strong on the back of the World Cup and favourable summer weather,” the trading statement said.