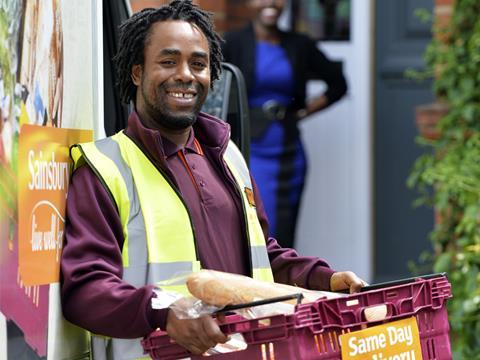 Sainsbury’s has launched a grocery same-day delivery service in a bid to compete with faster rivals such as Amazon Fresh.

Three stores in Streatham Common, Richmond and Brookwood, Surrey, will deliver groceries in the space of six hours for a price of between £5 and £7, while click & collect orders will be ready in four for a charge of £2. Delivery will be free on orders over £100.

The trial first rolled out in Streatham in June – coinciding with the launch of Amazon Fresh, which can deliver within the space of four hours. And Sainsbury’s plans to ramp up the initiative to 30 stores by Christmas if the trial proves successful, although it would not reveal the planned locations at this stage.

In a further commitment to its online strategy, the supermarket has also announced a new online fulfilment centre in Bromley-by-Bow, London, placing it in close proximity to Amazon’s Fresh’s operation in the same area. Sainsbury’s has created 470 jobs to help meet its target of processing another 25,000 orders a week through the centre, and will recruit a further 430 employees by 2020.

Sainsbury’s denied the expansion of its online service was connected to the Amazon’s venture into the grocery market and said it was part of CEO Mike Coupe’s long-held strategy to serve customers “whenever and wherever they want”.

At the presentation of its annual results in May, Coupe revealed that its online division had experienced a strong growth in sales of 9% last year and said demand had proven highest in the capital.

Robbie Feather, Sainsbury’s director of online, forecast further growth in demand in the area. “We expect this trend to continue as more and more customers enjoy the flexibility of multi-channel shopping using our groceries website and app,” he said.