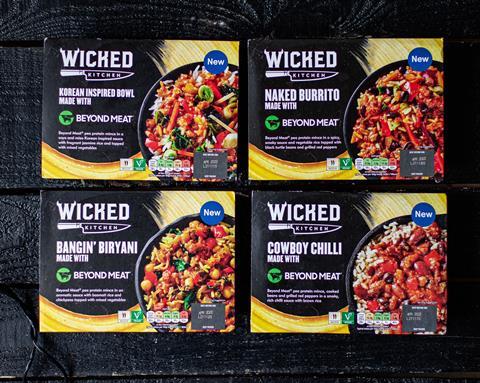 The mults are doing their best to accelerate that growth rate. In September, Waitrose announced the launch of its Plantlife and GoVeggie own-label ranges, comprising 36 products. As Waitrose has the greatest share of the plant-based market relative to its overall share of grocery, the launch is going to make a mark.

“We wanted to provide our customers with more choice when it came to incorporating a holistic approach to their meals,” said Waitrose executive chef Martyn Lee on announcing the launch. “Making ‘meat-free Monday’ or a flexitarian lifestyle even easier, these new ranges have inspired us to be more innovative.”

Waitrose isn’t alone. Tesco has pledged to quadruple the sales of its plant-based meat-alternatives by 2025 – and it’s driving that through NPD. May saw Tesco’s exclusive own-label brand Wicked Kitchen team up with US giant Beyond Meat for the launch of a range of co-branded frozen ready meals, comprising Bangin’ Biryani, Cowboy Chilli, Korean Inspired Bowl and Naked Burrito lines.

“Both Wicked Kitchen and Beyond Meat have worked hard to create excitement in the world of plant-based food in the UK and we are thrilled to be working with them on this new range,” said Tesco director for plant-based innovation Derek Sarno at the time of the launch. “We hope these new meals will encourage more people to try plant-based food.”

The Co-op, meanwhile, had the greatest relative increase in plant-based value sales over the past year at 52.9% [Kantar]. This follows the launch of the retailer’s 35-strong own-label vegan range Gro in January 2020. As the market matures, expect more such launches from rivals.