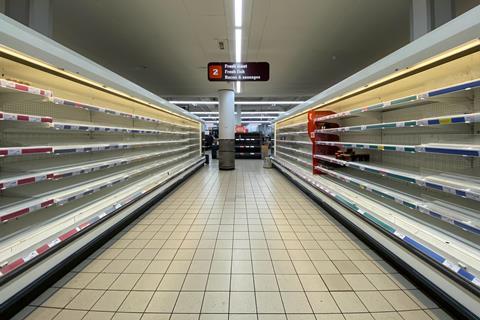 In a repeat of moves made last March, supermarkets are looking to recruit thousands of extra staff to fill vacancies

The food and drink industry is facing a workforce crisis with staff absence rates trebling in many parts of the country since the start of December, The Grocer can reveal.

Senior industry sources said they fear the impact of the latest lockdown measures, combined with the spread of the new faster-spreading coronavirus variant, is at serious risk of leading to food shortages within weeks. They have urged ministers to prioritise key food workers in the vaccination programme.

Meanwhile, supermarkets have revealed they are looking to recruit thousands of extra staff to fill vacancies, in a repeat of the moves last March when tens of thousands of part-time workers were employed to keep shelves stacked.

A raft of sources who have been holding emergency talks as part of Defra’s war room this week told The Grocer absence rates had soared in the past month. One warned that the closure of schools and self isolation imposed by the test and trace programme risked the closure of some food factories and the possibility of widespread rationing, on top of product limits already introduced by some supermarkets.

While the rates have not yet reached the peak of 23%-24% seen in the first lockdown, some areas of the country, including London and the south east, are aleady seeing levels above 20%.

“The most serious issue here is around absence,” said a source in the talks.

“Unless someone changes the strategy, there will be rationing by the end of the month because we’ll see factories, DCs and shops going offline.”

One supermarket executive is understood to have told ministers if absence rates continue to grow at the current rate it would have to close down its distribution.

“It’s not just driven by sick people”, said the source. “It’s a result of enforced self-isolation for healthy individuals.

“The policy of vaccinating elderly and vulnerable people first is socially right but economically catastrophic.

“As Chris Tyas (chair of the Defra war room) told the government in March, if you get to 30% absence levels these factories and shops and DCs will have to close.

“It’s a precautionary principle gone mad. We can either take a cautious risk-based approach or run out of food. It’s as simple as that.”

“To compound that (absence issue) we now have schools closing.”

The source also accused Defra of being unprepared for the new threat to the workforce, adding: “Until this morning, Defra just hadn’t thought of this. There is no plan for prioritisation of food supply. I would have thought that was their most obvious role.”

The Grocer has learnt Defra revealed the average absentee level across the food supply chain in Kent and the south east was currently at 15%, compared with 5% in September.

“The situation is not catastrophic, yet,” said another source.

“But we have got pockets where the absence rate is up to 20%. Much of that at the moment is in the south where there is not a huge concentration of food factories but the increase is worrying.

“The warning lights are well and truly on.”

A supermarket source told The Grocer retailers were facing having to embark on major recruitment programmes to fill vacancies left by the impact of the virus and the impact of lockdown and testing regimes.

“When people see empty shelves in store they immediately assume it’s because of panic buying but it’s about having the people to get it on the shelves,” they said.

“This is a very serious problem right across the supermarket sectors and its caused by a combination of the actual illness and people self isolating because of test and trace.”