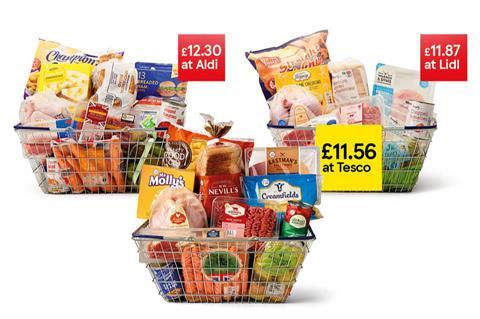 A series of ads, launched in October last year, featured trolley and basket loads Tesco claimed were cheaper than at Aldi or Lidl

Tesco’s claim to be ‘cheaper than Aldi’ has backfired after the UK’s advertising watchdog found it had misled consumers.

The discounter lodged complaints about a series of press and television ads, launched in October last year, which sparked a tit-for-tat marketing war between Tesco and the discounters.

The ads featured trolley and basket loads Tesco claimed were cheaper than at Aldi or Lidl.

Aldi claimed they were misleading because the baskets were entirely comprised of Exclusively at Tesco own-brand products and did not represent a typical shop.

Today the Advertising Standards Authority ruled Tesco had been in breach of laws, not because the own-label products were not cheaper than the discounters, but because they were “not widely available throughout Tesco stores”.

At the time of launching its ad battle, Tesco CEO Dave Lewis told analysts the time had come to start communicating that it was “not just price-matching but price-beating” the discounters, having relaunched thousands of own-label products under the Exclusively at Tesco banner.

When pressed more closely by The Grocer at the time, Tesco admitted it did not claim to be cheaper than Aldi or Lidl overall, but across selected Exclusively at Tesco products.

In its ruling, the ASA found the ads gave the overall impression consumers could save money by swapping from shopping at Aldi or Lidl to buying from the Exclusively at Tesco range.

“While we were satisfied with the basis upon which the products to compare had been selected, we were concerned that the Exclusively at Tesco products were not widely available throughout Tesco stores.

“We therefore concluded that all of the ads were misleading because they did not make clear that none of the products from the Exclusively At Tesco range were available in Tesco Express or Metro stores, and that the specific combination of products upon which the savings were calculated were available in fewer than half of their larger stores.”

The ASA has ruled that none of the ads should appear again in their current form.

However, the body also found Tesco was not in breach of two other complaints made by Aldi.

The discounter had claimed there was a delay between the prices being checked and the publication dates of the ads, and that in some cases prices were checked over several days rather than on a single day.

The ASA said it was “unlikely” this would lead to consumers being misled.

Aldi had also claimed that is some cases it had cheaper comparable products than those used in the comparison.

“We understood that Aldi objected to the Aldi bacon product Tesco had selected for the comparison because they sold that cheaper bacon product (Aldi’s Everyday Essentials unsmoked back bacon), which they believed was comparable,” said the ASA.

“Although we acknowledged that the emphasis of the comparison in the ads was price rather than quality and they had been directed at the price-conscious consumer at Aldi and Lidl, we nonetheless considered that the selection of the two bacons in the ad (Aldi’s Freshcure Unsmoked Back Bacon and Tesco’s Woodside Farms Unsmoked Back Bacon) would be in line with consumer expectation of the appropriate product comparison. Because of that we considered the ads were not misleading.”

However, the ASA’s ruling turns the tables on Tesco, which last week successfully argued to have an Iceland ad banned over “misleading” price comparisons.

Last month, the ASA banned Lidl advertising that it found misled customers over the potential savings they could make compared with Tesco. Just a week earlier it upheld a complaint by Tesco that Aldi had unfairly skewed a price comparison in its favour.