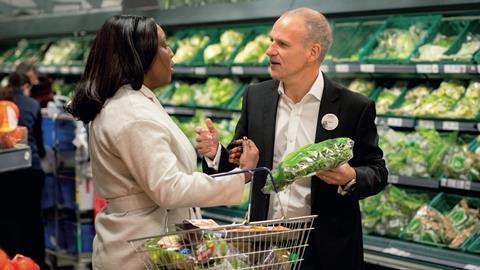 We talk to CEO Dave Lewis about the turnaround of Tesco after the staggering losses of 2014—plus plastic pollution, his pride in colleagues and breaking a world dance record

When Dave Lewis arrived at Tesco in 2014, the business was in big trouble. After 95 years of rapid acceleration, Tesco had stuttered, then stalled. CEO Philip Clarke left in September 2014 and Lewis flew home early to start immediately.

Lewis quickly took control, revealing a jaw-dropping loss of £6.4bn, and announced a turnaround project. It’s now back in the black, most recently returning full year profits of £2.2bn. But where does he feel the turnaround is right now?

“Just about there. In April we said we’d met most of the targets we’d set for ourselves, and we would finish the rest this year. So if anything, we’re slightly ahead. That first phase of recovery and stabilisation is, I think, behind us, and now we are looking at the future.

“From a customer point of view, rebuilding the trust in the brand has made significant progress. Feedback from colleagues is significantly stronger than it was in 2014. There’s an awful lot of work going on with suppliers to change the relationship we have with them. And shareholders say the recovery is going well, we’ve recovered the dividend, we’ve paid down significant amounts of debt, the balance sheet is stronger. And we have reached investment grade with certain ratings agencies. So, across all four stakeholders, there has been quite a lot of progress.”

On the all-important shop floor, which had demonstrably suffered in the three years before Lewis arrived, that recent progress was reflected by Tesco scooping the Grocer Gold awards for Service and Availability, following years of dominance by Sainsbury’s.

“It’s important. We’ve not been recognised for either one since 2011, I think, and we can’t remember ever winning both of them at the same time. We talked all the way through the turnaround that the only thing that matters is customers and the importance of putting them at the centre of every single thing we do. So, despite the financial position we were in back in 2014, the first thing we did was recruit more colleagues. There are now thousands more colleagues in our stores. We have reduced head office, but actually on the shop floor we have significantly more colleagues than we had four years ago.”

As for availability, he says the improvement was no real surprise as it’s been a major focus. For instance, Tesco identified what it calls “Star Lines, where we took the one thousand lines that mattered most and made sure their availability at 8pm on a Thursday was as strong as at 9am on a Monday morning. That went really well and scaled very quickly”.

Tesco also launched the Informer app, so if a shopper can’t find what they are looking for, and has to ask a Tesco colleague if they have any ‘out back’, rather than wandering off ‘out back’ to check the stock room, colleagues can now whip out their smartphone, scan the shelf edge label and check whether there is stock out back, or when it is next coming in. “Customer service is much quicker and colleagues absolutely love it.”

Also on the shop floor, another major focus has been on Tesco’s own brand range. Lewis talks about “all the work that’s gone back into thinking about the quality and the price of own brand, getting back to good, better, best, with clear differentiation between the three, and versus our competition”. 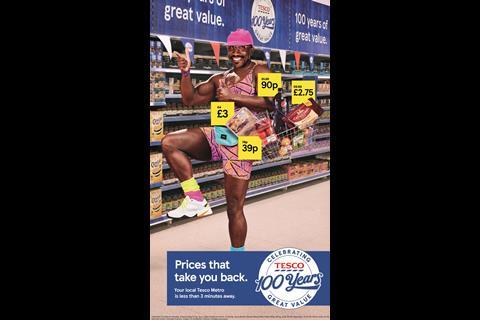 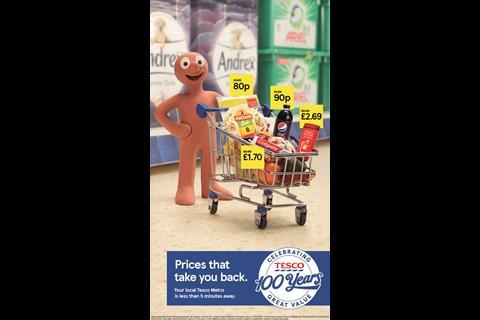 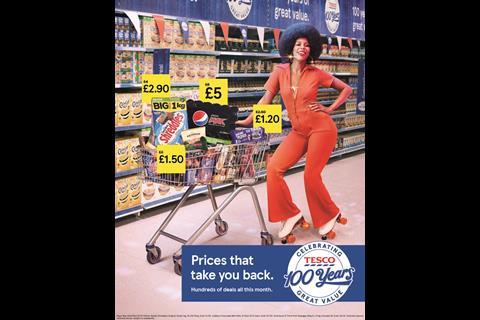 “The number of products and the differentiation in quality suffered over time. So we reduced the number of products, because the differentiation between the three tiers had been lost, re-established those three tiers, relaunched 10,000 lines – our biggest ever relaunch – and rebuilt the participation back up to 51% in the last period. So own brand was definitely a point of innovation. To give you an idea of the scale of that, ‘Exclusively at Tesco’ did £380m sales in its first 12 months. That’s solely for the ‘good’ tier.”

Then there is loyalty, something Tesco has always been famous for, thanks to the pioneering introduction of Clubcard in 1995. But Lewis says it had become more of a “promotional tool than a reward for loyalty. So over the last three years we started to invest in it again. First of all, just in the capability of the card. We re-carded everybody, so it could be contactless and therefore more convenient, and we digitised the whole experience so they don’t need to wait for three weeks to see the paper-based rewards they have”.

It also launched the Clubcard app and, more recently, trialled Clubcard Prices, which offered savings of up to 50% on individual items. “In the last 12 months we have achieved a million new Clubcard users – we now have more than 19 million active users. In 2014 it was about 17 million.”

However much progress it makes, Tesco needs that loyalty because its rivals are no slouches. A look back at Tesco’s history will always see its duel with Sainsbury’s looming large, and it achieved the lead in 1995 to become the UK’s biggest supermarket. But Sainsbury’s came close to stealing the lead again in 2019 until the CMA blocked its merger with Asda. It was good news for Tesco, so how did Lewis react?

“I had no reaction really. When it comes to Tesco’s rivals you can talk about Asda or Walmart, you can talk about Morrisons and Safeway. There are always times in our history where we’ve been very competitive for whatever has been happening in the market.

“I think Tesco lost its way between 2010 and 2014 because it spent way too much time thinking about what its competitors were doing and what the reaction should be, and stopped leading. So what you hear me say to my team is as long as we focus on the customer, and we keep leading, then it’s for others to worry about what we do, not for us to be worrying about what they do. So when people ask me was I worried about Sainsbury’s and Asda? No, I was focused on Tesco.

Away from its rivals there are other challenges, major public-facing issues every supermarket is having to contend with, like plastic pollution.

“The changes we are making as a business reflect the hard work of every one of our 450,000 colleagues.”

“The really hard part about this debate, I think for some, is that plastic is not a bad material and actually it’s the right material for some things. The issue of plastic is what you do with it when you’ve used it. The solution we’re focused on is to remove plastic where possible, reduce the amount we need, reuse it when we’ve created it, and then recycle it when it’s done. If you do that, you close the loop. We would be very happy to lead the closing of the loop, and we made that proposal to Defra 18 months ago. We could use our car parks to help create that circle, but we need the government to close the loop in a national recycling infrastructure.

“There’s a whole series of other things that are being done in terms of plastic recycling that we’re testing, a whole series around removal of plastics, there’s testing throughout different stores of different things, the critical thing is getting customers to come with us.”

He’s also “very interested in how retail can play a role in some of the government’s food strategies, environmental strategies and health strategies”.

Right now, Tesco is using its centenary year to remind the business of what it’s all about, like being the “customer’s champion and delivering value for customers, because wherever you look in the 100 years of Tesco it comes out time and time again”.

It’s also using the occasion to promote its charitable partnerships. “We have a five-year partnership with Cancer Research UK, the British Heart Foundation and Diabetes UK. So we have a colleague panel to discuss our charitable work and we needed 500 colleagues to make the panel big enough. Over 8,000 colleagues signed up. And on top of that we are doing other fundraising events, like Dance Beats, our biggest ever national fundraising campaign.”

If Lewis was apprehensive about his ‘dad dancing’, it didn’t stop him joining 4,000 colleagues in an energetic Guinness World Record breaking 30-hour relay dance-off at Wembley Stadium alongside Pussycat Doll Kimberly Wyatt, held as part of Dance Beats, a big centenary fundraising celebration. What he is “really excited” about is how, after 100 years, Tesco has become a shining example of meritocracy when it comes to developing people. 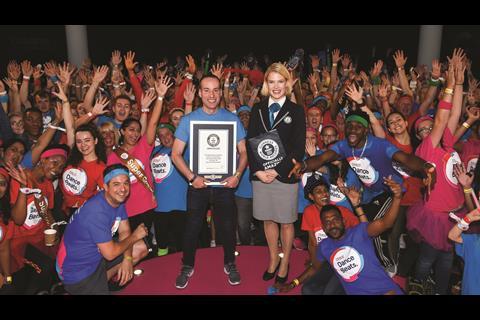 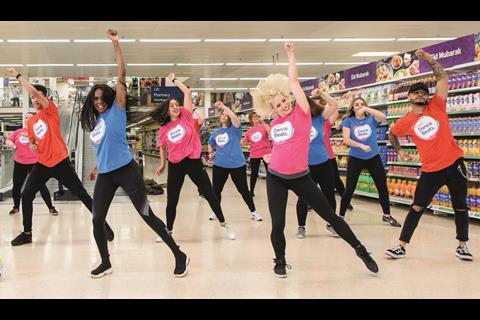 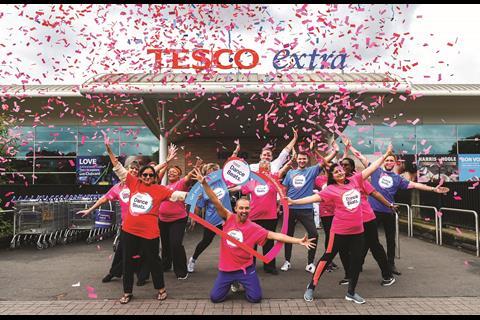 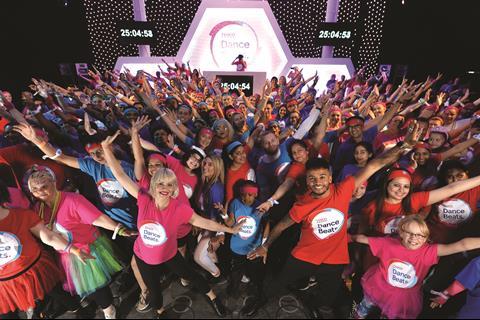 “The changes we are making to our business reflect the hard work of every one of our 450,000 colleagues. When I first arrived, I was humbled by our colleagues and their drive to do their best for customers. I talk about our people as being the heart of Tesco. Every day, I see that heart beating strong in every store, distribution centre or office I go to. We would not have been able to make the progress we’ve made over the last few years without their commitment and belief and I’m deeply grateful for that.

“We always talk about Tesco being a place to get on,” he says. “The last two people that ran Tesco started on the shop floor. There’s no better example of where you can really, truly, get on than at Tesco, I’ve never seen anything quite like it. And getting back and embracing that, and investing in that, is very exciting stuff for me.”