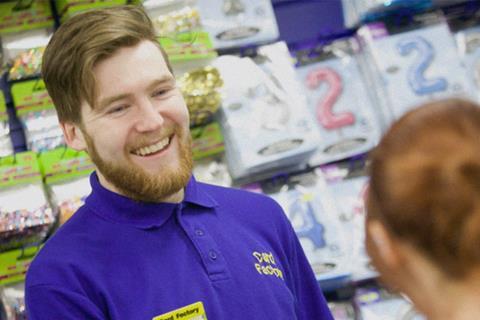 Greeting cards and gifts chain Card Factory has posted flat like for like annual sales despite a “tough consumer environment” but saw profits hit by rising costs.

The chain delivered a like-for-like sales decline 0.5% in the year to 31 January, reflecting lower levels of high street footfall and consumer confidence.

Including 56.3% growth from its online site cardfactory.co.uk, like-for-lie sales from the Card Factory fascia were -0.1%. This compares to a 2.9% rise in its previous financial year.

During the year it opened 51 net new stores across a variety of retail locations including high streets, shopping centres and retail parks. At year-end the group had 965 UK stores with a further seven stores in the Republic of Ireland.

It is also running a trial with Aldi, which is “seeing Card Factory ranges resonate well with Aldi customers” across 112 trial stores and demonstrating “our capability to appeal to impulse card buyers through other sales channels, without cannibalising our own store sales”.

Underlying profit before tax fell 7.3% to £74.6m as profits were impacted by headwinds from foreign exchange and national living wage.

CEO Karen Hubbard, Chief Executive Officer, commented: “We delivered a robust performance for the year, maintaining flat like-for-like sales despite a tough consumer environment. Our focus has been on continual improvements to our customer offer, producing better, more innovative ranges of everyday and seasonal cards and maintaining our quality and value positioning, while also being more efficient and driving savings across the business. EBITDA for the year however, was impacted by lower footfall and Getting Personal’s disappointing performance.

“We continue to look to leverage our unique, vertically integrated model to improve our competitive advantage and drive margins. We have further initiatives planned for the current year which will bring further production back to the UK, whilst also implementing additional plans that will allow an improved focus on customer service in store.

“New stores remain our biggest growth channel, and we opened a net 51 in the year, with a good pipeline going forward. We are now also exploring other opportunities to extend our reach beyond 1,200 stores in the UK and internationally to drive profitable growth. Encouragingly, some initial trials with Aldi in the UK, in an Australian retailer, and with a franchise partner in Jersey show that the Card Factory brand is a footfall driver that has real resonance; we will pursue these types of opportunities to open new routes to market where we see attractive returns.

“Whilst the new financial year is just two months old, we are satisfied with the start we have made and are particularly pleased with record seasonal performances from Valentine’s Day and Mother’s Day. As previously stated, EBITDA for the forthcoming year is anticipated to be broadly flat year-on-year (excluding the impact of IFRS 16) in light of various external pressures, but we are confident we are laying the right foundations for future profit growth, whilst continuing to deliver healthy returns of cash to our shareholders.”

A quiet morning as we head towards the Easter break, although there are plenty of global fmcg updates to be squeezed in in the coming days.

Card Factory is up 2.2% to 180.9p after its annual results this morning, though remains significantly down on the lever of around 240p is was at this time last year.

CARR’s Group (CARR), slumped 8.7% yesterday back to 142.5p as it announced poor weather had hampered the performance of its agricultural business in its full year accounts.