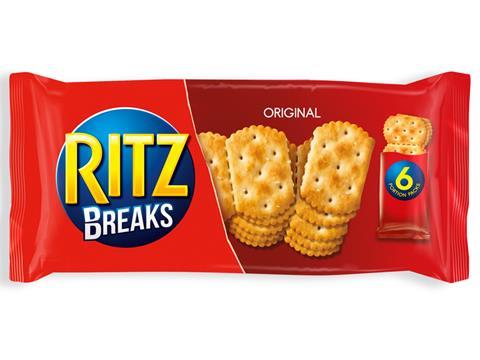 Mondelez is looking to tap the “huge opportunity” in savoury biscuits with development of its Ritz brand that includes the first TV advertising in almost 30 years.

A string of NPD is planned for the coming year, starting with Ritz Breaks - snack packs of five strips of three crackers. Available in Original and Rosemary & Olive Oil, the baked snack goes on sale next month (rsp: £1.89/six-pack multipack). The rollout follows last year’s relaunch of the Ritz brand, which grew 0.9% year-on-year to £13.6m [Nielsen 52 w/e 12 October 2013].

The launch will be supported by a £2.5m UK marketing spend from next month including the first TV ads for the brand since 1985, in-store activity and price promotions.

Mondelez had a “pretty blank canvas” for developing Ritz in the UK, said marketing manager Rick Lawrence. “The Original biscuits are traditionally sold at Christmas and for parties, but the brand doesn’t have a firm position.”

Ritz Breaks were aimed at younger consumers as an afternoon snack. “We see these as a product for millennial consumers who lead rich, busy lives and will use Breaks to re-fuel,” added Lawrence. Mondelez already sells multipacks of mini Original Ritz biscuits, which it said were typically eaten at lunchtime with a sandwich.

“There is an opportunity to take advantage of an untapped occasion of an afternoon snack - most convenient savoury products are either too boring, too ‘naughty’ or not filling enough,” said Lawrence, adding that products similar to Break performed well in Italy under the Tuc brand and South America as Club Social.

In the UK, Mondelez had learned a lot about driving category growth from its success in chocolate and coffee - with Cadbury Dairy Milk and Kenco Millicano - and would apply these lessons, said Lawrence.