How Tesco can improve the health of its peers, as well as the nation 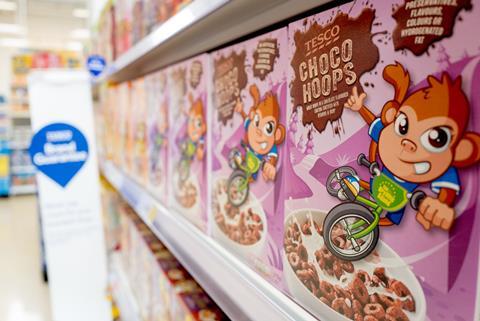 ‘I know what clout Tesco has not only in the supply chain of British retail, but in what foods we eat as a nation,’ says Lindley

Right now, the UK’s largest retailer has a momentous opportunity to improve the health of the nation. The opportunity is not only to support the health of their own customers, but also those of their competitors. How, you ask? In February, Tesco was hit with a shareholder resolution, asking the company to disclose and set a target to increase the proportion of its sales that come from healthier food and drink products. This was the first health-based resolution to be filed by investors at a UK listed company.

I was one of the co-filers, being a small shareholder investor. But I am also the founder and former CEO of a company supplying into the behemoth, so I know what clout the company has in the supply chain of British retail, as well as what foods we eat as a nation. It’s not an exaggeration to say that the decisions it takes affect us all. Following the tabling of the resolution and after discussion with shareholders, Tesco pledged to increase its sales of healthy products from 58% of total sales today to 65% by 2025.

This is a positive step and a reminder of the power of shareholder engagement to shape company practices. But Tesco now finds itself with an even bigger opportunity to set a precedent that could drive up health standards among its peers, too.

At present, the shareholder resolution remains on the ballot to be voted on at the AGM in June. Tesco has already gone a significant way to meeting its demands but has not yet set out whether it will encourage shareholders to vote for or against the resolution. Tesco could oppose the proposal, arguing that it is now irrelevant.

Or it could do something interesting. Tesco could embrace the opportunity to have investors approve its health plan – either by recommending a vote in favour of the shareholder resolution, or by tabling its own resolution on the subject.

A resolution with Tesco management’s backing would likely pass, further raising the profile of this critical issue and applying pressure on the wider retail sector to follow Tesco’s lead. It would make it much more likely for similar resolutions to be filed at competitors – and more likely that these votes would be approved by shareholders looking to demonstrate consistency in voting behaviour.

A swell of shareholder support for corporate action on healthier diets could translate into many more companies setting similar targets, helping to shift the entire food industry toward greater ambition on health. This would be an enormous win for public health, and one in which Tesco could take real credit for playing a leading role.

Dave Lewis, Tesco’s last CEO, responded to the government’s new Food Strategy by saying greater regulation was needed to bring about a level playing field and drive change. Sure, new laws have a role to play, but there’s a role also for enlightened shareholders working closely with management teams of companies in their portfolios. As a co-filer of the resolution going to the vote shortly at Tesco’s AGM, I hope 2021 will be a year that proves that activating the power of investors can be equally effective.

What will happen next is anyone’s guess. Tesco is already a leader in terms of market share – it knows that most of us shop there at some point each year – but it now has an opportunity to demonstrate a different kind of leadership. By encouraging investors to vote for a shareholder resolution on its health plans, Tesco can usher in a new era of shareholder-led progress on health issues right across the food and retail sectors. Now is the time and I encourage Tesco executives to claim that mantle of true leadership.