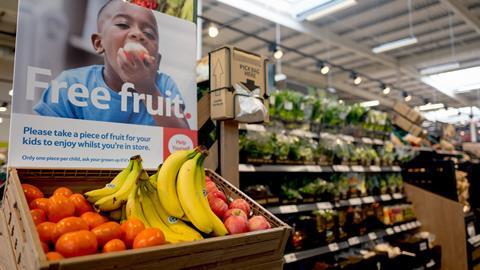 Tesco boss Ken Murphy always knew he would have to face some tough comparisons with predecessor Dave Lewis.

That became even more evident when City analysts sniffed at the 8.1% like-for-like growth achieved by Tesco over Christmas. In any other circumstances, it would have been seen as a triumphant start. But in the shadow of Lewis, it barely earns a shrug.

Murphy doesn’t just face a high bar in terms of financial performance. Under Lewis, Tesco turned around perceptions of its wider role in society, too.

That improved image was shaken today by a coalition of institutional shareholders, spearheaded by the ShareAction group, who claimed Tesco had been left trailing by other supermarkets in the battle against obesity.

They are calling on Tesco to commit to binding targets on a reduction in HFSS products on its shelves, following moves by rivals such as Sainsbury’s and Marks & Spencer.

It’s an audacious move that will see the proposal debated at Tesco’s AGM in the summer. But regardless of whether the resolution is won – which seems doubtful despite it being backed by seven institutional investors managing over £140bn in assets, along with more than 100 retail investors – it raises big questions for Tesco and other supermarkets.

Unlike Lewis’ pioneering moves for transparency on food waste, which saw him catapulted to help lead the UN’s efforts on the matter, Tesco’s promises to tackle obesity have faltered, not least because of the impact of the pandemic.

It seems a long time ago (in fact it was only 2018) that Lewis stood with the heads of Cancer Research UK, Diabetes UK and the British Heart Foundation, promising to wage war on obesity. He even took a swipe at suppliers for failing to make healthy food affordable.

Tesco’s efforts since have failed to tackle the price differential of healthy versus unhealthy food, even with sales for fresh fruit & veg at record levels. Its ‘Little Helps to Healthier Living’ campaign, which began in 2017, has never quite been fully convincing. From the outset, the campaign saw high fat, salt and sugar foods promoted alongside healthier alternatives, rather than simply setting out the healthy options in isolation. At the time, Lewis said he was keen to avoid taking choice away from consumers.

The following year, Tesco signed up celebrity chef Jamie Oliver to front its healthy eating initiative – but it has been noticeably lower-key than his previous role with Sainsbury’s. While Oliver’s healthy recipes continue to be published online, the campaign certainly didn’t “change the rest of the industry” as Oliver told The Grocer he thought it would at the time.

Understandably, Tesco today came out fighting, citing the 100 million pieces of free fruit given to children since 2016, and the 50 billion calories it’s removed from products since 2018.

But perhaps the biggest embarrassment was that one of the rebel shareholders, Guy’s and St Thomas’ Charity, had itself been working with Tesco on what it hoped could become a flagship strategy against obesity.

In October, The Grocer revealed how a pilot across London supermarkets – backed by the charity and The Consumer Goods Forum, and co-chaired by Tesco – had shown how making healthier food cheaper could in some cases lead to double-digit increases in sales.

Yet the official report says the project was hamstrung by a “lack of commitment among retailers and suppliers”, while a Tesco project to promote fresh fruit & veg, which had seen sales spike by nearly 15%, was canned because of the pandemic.

Jessica Attard, head of food & health at ShareAction, who was working with Guy’s and St Thomas’ at the time of the pilot, says Tesco went “far beyond their competitors” in the trial, adding: “That’s why we were desperately disappointed those trials haven’t been scaled up.”

Of course, the rebel plans are much more than an attack on Tesco. In what they openly describe as an attempted “revolution”, ShareNation want to flip the whole idea of shareholder priorities on its head, using the biggest beasts of them all as an example. But it comes amid uncertainty over which direction the government will take on public health.

With obesity proven to be a major risk factor for mortality and serious illness due to Covid, the government is poised to launch a sweeping ban on HFSS promotions in store, as well as a clampdown advertising online and on TV. The industry fears this could cost as much as £3bn a year.

Yet at the same time, leaked papers last week suggest ministers are preparing to put the onus on healthy lifestyles, rather than what has so far been a failed strategy of bombarding the industry with hundreds of targets for reformulation. Tesco’s response to the shareholder challenge – and that of other supermarkets – will have repercussions that go far beyond its forthcoming AGM.