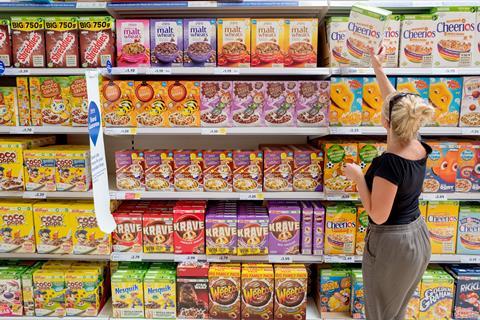 Tesco CEO Ken Murphy today announced a new commitment from the supermarket to tackle obesity, including a new target for a major programme of reformulation.

The retailer, which has come under fire from shareholders for its lack of action in recent years on health, has set a new aim of 65% of total sales coming from products defined as healthy by the government’s nutrient profiling model.

Tesco also promised to increase sales of plant-based meat alternatives by 300% by 2025, and to increase the percentage of ready meals containing at least one of the recommended 5 a day to 65% by 2025 (currently 50%).

Murphy’s commitment follows fierce criticism by a group of influential Tesco shareholders, including some of those it has teamed up with on previous health products, who claimed it had been left trailing by other supermarkets in the fight to tackle obesity. The shareholders called for a target to be set on health products with a resolution filed for the forthcoming AGM by institutional investors including Robeco, JO Hambro and Guy’s & St. Thomas’ Charity.

As well as the reformulation programme commitment, Murphy promised changes to promotions and pricing to remove barriers to buying healthy food.

He said progress against the plans would be reported publicly and underpinned by the new targets.

Tesco said the reformulation programme would remove billions of calories and thousands of tonnes of salt, fat and sugar from products, having already removed more than 50 billion calories from its products since 2018. Its move comes ahead of the government’s proposed ban on HFSS promotions, which due to come into force next April.

“Customers are telling us they want to eat a more healthy, sustainable diet, but without having to stretch the weekly shopping budget,” said Murphy. “By making even very small changes to the items they put in their basket week in, week out, we can help them make that change.

“We’ve worked hard to help our customers eat healthily and we’re proud of our track record, and it’s clear we can do more. Today we are sharing our stretching new ambitions on health and committing to reporting our progress against them.”

Reacting to the new commitments, organisers of the shareholders’ revolt said it was a sign of how investor engagement could bring change.

They have accused Tesco’s previous work under its Jamie Oliver-backed Tesco’s Little Helps to Healthier Living programme, which launched in 2017, of lacking the transparency and clear targets of heathy eating programmes such as M&S’s Plan A and the obesity commitment set by Sainsbury’s.

“Tesco’s new plans are an important recognition of the role supermarkets play in shaping our diets, at a time when our health has never been more critical,” said Jessica Attard, head of health at ShareAction.

“We look forward to continuing to work with Tesco, and to seeing other supermarkets and food manufacturers step up to this challenge.”

Peter van der Werf, senior engagement specialist at Robeco, said: “We are pleased that Tesco recognises the need to take action on nutrition and is now ready to announce the nutrition target for 2025 in the Little Helps plan.

“It shows once more that engagement with companies, and filing shareholder resolutions, is a powerful tool to help companies moving in a more sustainable direction. We thank Tesco for their willingness to discuss these important matters with us as investors, as we believe this is in the long-term interest of both the company, our clients and broader society.”