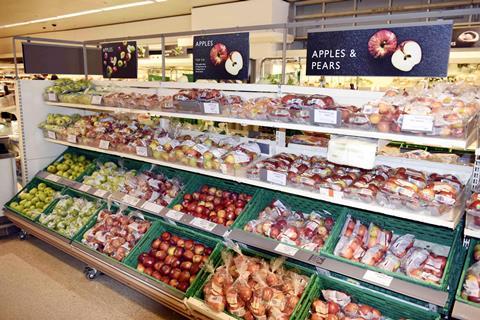 Waitrose bagged its first store of the week award since early March with its strong standards and service at its Kingsthorpe store.

Racking up an impressive 86 points, the branch delivered the goods even as it kicked off a major refurbishment.

While in-store standards and customer service stood out, availability was also strong. Our shopper only missed out on a full basket as the little gem lettuce was out of stock.

Our shopper described the store as “really nice, very well laid out, tidy and organised”. She had no difficulties in finding staff when she needed them and praised them as being “very helpful and personable”, even opening a till for her.

Runner-up Tesco Lincoln pushed Waitrose close this week with a score of 82. Again, it was for the most part a smooth experience.

She approached two members of staff for help and both were excellent. However, the checkout operator was less friendly, starting to scan the next customer’s items before our shopper had time to finish putting her purse away.

Morrisons scored 69 points. Our shopper said the store was well stocked, barring some noticeable gaps in the beers, wines & spirits and ice cream sections, which she attributed to the “unexpectedly warm weather”. She picked up 28 items, with four out-of-stocks and one not-stocked line.

Staff were friendly and helpful, either taking our shopper to the item she needed or telling her it was out of stock. None of them made any further checks in the stockroom, however.

The store lost further marks as the tills were not being managed, allowing queues to form into the aisles.

Asda was the only store without any out-of-stocks. However, our shopper couldn’t complete a full basket due to four not-stocked items.

For the most part, the store was clean and tidy, though our shopper spotted some spilt milk that seemingly had not been noticed by staff.

Staff were helpful and friendly on the shop floor but our shopper was less impressed by the “impersonal” experience at the till, with the checkout operator only speaking to him when he said goodbye.

Availability was the biggest issue at Sainsbury’s Wakefield, which managed just 58 points. There were four out-of-stocks and one not-stocked item.

The store was struggling with a refrigeration problem and many chilled and frozen areas were cordoned off. This clearly affected availability.

Staff were hard to find at times and were polite but not exceptionally helpful – barring the checkout operator who was friendly, chatty and efficient.

“I would not visit this store again,” was the damning verdict on Iceland Morden, which our shopper gave just 16 points. There were 10 out-of-stocks and five not-stocked items.

Our shopper called the store “unkempt and untidy” with rubbish even blocking the fire exit. Abandoned restocking trolleys made it almost impossible to socially distance in the narrow aisles.